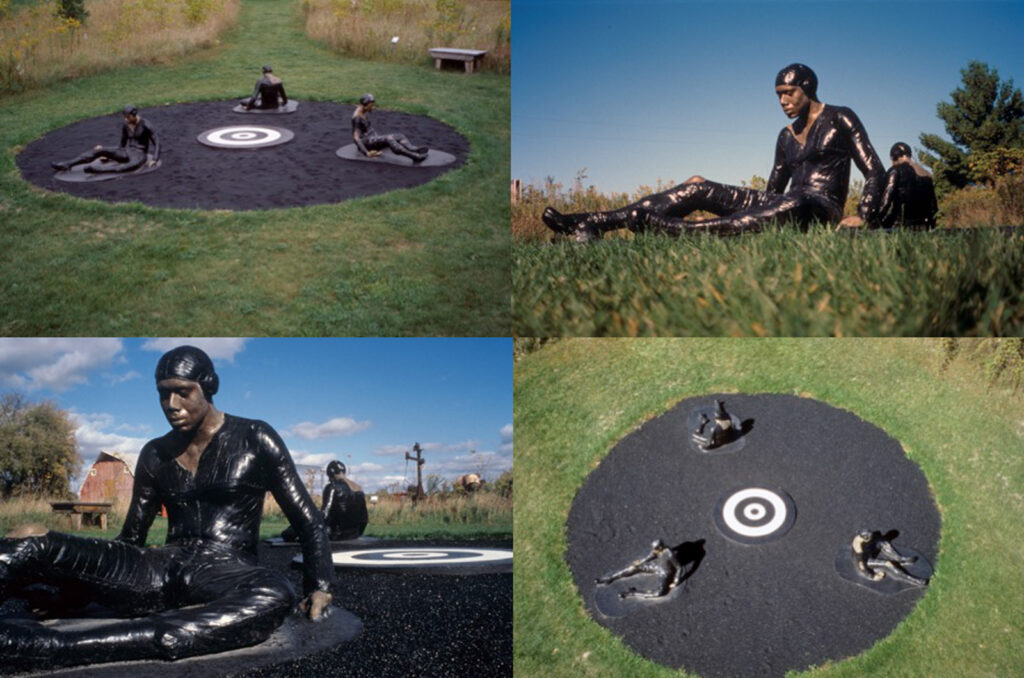 Michael Richards: Are You Down? is the first museum retrospective of Michael Richards’ artwork, exhibiting both his extensive sculpture and drawing practice.

Of Jamaican and Costa Rican lineage, Michael Richards was born in Brooklyn in 1963, raised in Kingston, and came of age between post-independence Jamaica and post-civil rights era America. Richards used the language of metaphor to investigate racial inequity and the tension between assimilation and exclusion in his art. Flight and aviation were central themes for Richards as an exploration of freedom and escape, ascendance and descent. His artwork gestures towards both repression and reprieve from social injustices, and the simultaneous possibilities of uplift and downfall, often in the context of the historic and ongoing oppression of Black people.

In a 1997 interview, Richards stated, “I think history has always been important to me because if you examine the past you can also read the symptoms of what is prevalent now in terms of racial associations and the relationships of power present in our society today. History is interesting in terms of how we mythologize it, how we accept history or interpretations of history as fact, and whose interpretation it is. In many ways my history is so different from the official white versions.”

Significant points of reference for Richards include the Tuskegee Airmen—the first African American pilots in United States military history—and the complexity of their triumphs in the face of segregation. Other important influences include cultural, religious, and ritual stories from African, African American, Jamaican, and Judeo-Christian traditions, as well as Greek mythology. Richards merged worlds in his artworks, bringing together spiritual and historical references with popular culture to conflate the themes of his practice. His recurring interest was in both the everyday and the transcendent, and how bringing them into conversation with each other opens up a plurality of representation and interpretation. Centering his own experience, Richards also used his body to cast the figures for his sculptures, which often appear as pilots, saints, or both.

Michael Richards had a close creative relationship to Miami, making the city and MOCA North Miami, a fitting location for this retrospective. From 1997–2000, Richards was an artist-in-residence at ArtCenter/South Florida (now Oolite Arts), spending three months each winter for three years making work and developing community in Miami. Richards created the sculptures Tar Baby vs. St. Sebastian and Are You Down?, the exhibition’s namesake, in this artist studio. Additionally, Richards had his largest solo exhibition in 2000 at Ambrosino Gallery, previously located across the street from MOCA.

Tragically, Michael Richards passed away on September 11, 2001 while working in his Lower Manhattan Cultural Council World Views studio on the 92nd floor of World Trade Center, Tower One. At age 38, Richards was an emerging artist whose incisive aesthetic held immense promise to make him a leading figure in contemporary art. On view through October 2021, this retrospective also marks the 20th anniversary of September 11 with the largest ever exhibition of Richards’ work.

Michael Richards: Are You Down? takes its name from one of the last artworks Richards created during his lifetime. The retrospective features nearly all of the artwork Richards made during a prolific decade of artistic production between 1990 and 2001. The exhibition includes numerous sculptures and drawings, as well as documentation of early site-specific installations and images of no longer extant work. Several of Richards’ sculptures have been recently conserved, and are on view at MOCA North Miami for the first time since the artist’s passing.

Richards was integral to a generation of Black artists emerging in the 1990s—including Renee Cox, Lyle Ashton Harris, Kerry James Marshall, Dread Scott, and Kara Walker, among many others—whose powerful artworks confront the realities and consequences of racial injustice, and amplify the complexity of Black identity.

Richards’ artistic engagement with Blackness, masculinity, diaspora, spirituality, police brutality, and fallen monuments is especially urgent and pressing today. Though Richards’ work is certainly of its time in the 1990s, it simultaneously speaks poetically and provocatively to our contemporary moment. 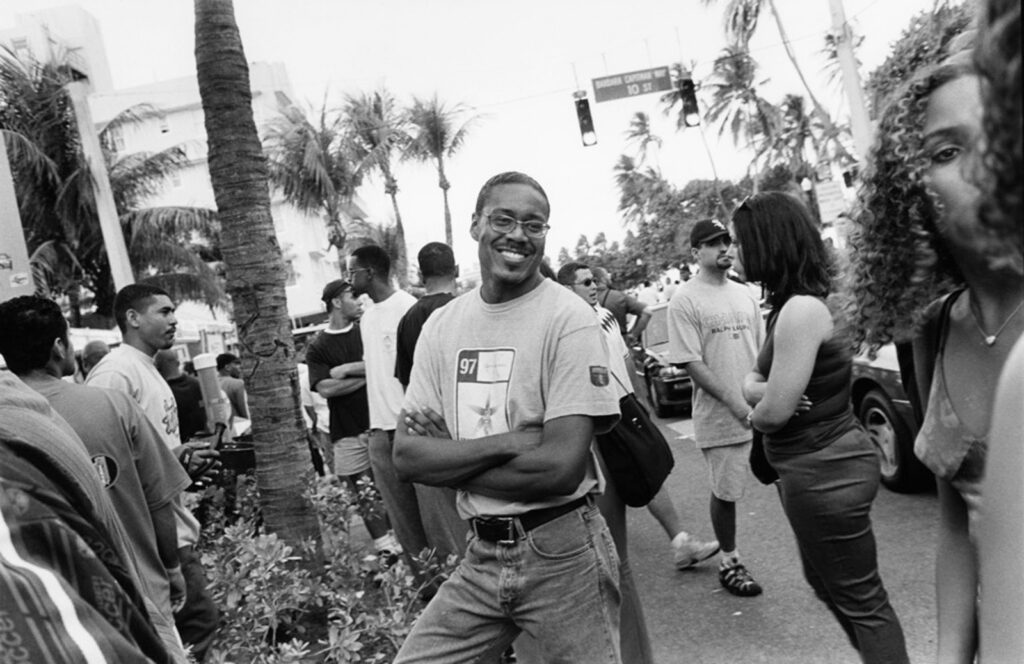 Michael Rolando Richards (1963–2001) was born in Brooklyn, New York and raised in Kingston, Jamaica. Richards moved back to the United States to attend Queens College, where he earned a BA in 1985. He received an MA from New York University in 1991, and attended the Whitney Independent Study Program from 1992–93. During his lifetime, Richards won several competitive awards including a 1995 Art Matters Individual Artist Grant, and participated in esteemed artist residencies at institutions such as the Studio Museum in Harlem and the Bronx Museum of the Arts. Richards had a solo exhibition at Ambrosino Gallery in North Miami in 2000, and was featured in two-person and group exhibitions nationally and internationally at the Corcoran Gallery of Art, Washington, D.C.; The Studio Museum in Harlem, New York, NY; Miami Art Museum, Miami, FL; and Debeyard Museum, Amsterdam, The Netherlands, among others throughout his career. Richards’ artwork is held in museum collections including The Studio Museum in Harlem, NY; the Brooklyn Museum, NY; the Virginia Museum of Fine Art, Richmond, VA; and the Pérez Art Museum Miami, FL. Franconia Sculpture Park, near Minneapolis, MN, is home to a permanent memorial to Michael Richards—Are You Down?—a bronze recast of an original, large-scale sculpture by Richards, originally displayed during a Fellowship there in 2000.

Alex Fialho is an art historian, curator and graduate student in Yale University’s Combined PhD program in the History of Art and African American Studies. Fialho previously worked for five years as Programs Director of the New York-based arts non-profit Visual AIDS, and is a contributor to Artforum. Fialho’s writing has been published in exhibition catalogs for the Whitney Museum of American Art, the Studio Museum in Harlem, Socrates Sculpture Park and the Andy Warhol Museum, among others.

Melissa Levin is an arts administrator and curator with nearly 20 years of experience. For more than 12 years, Levin worked at Lower Manhattan Cultural Council as Vice President of Cultural Programs, where her role encompassed wide-ranging institutional and artistic leadership, including overseeing LMCC’s artist residencies, exhibitions and public programming. Recently, Levin was Vice President of Artists, Estates, and Foundations at Art Agency, Partners for three years. She currently serves on the boards of the Alliance of Artists Communities and Danspace Project.

Together, Fialho and Levin have curated exhibitions together since 2014, including Trisha Brown: Embodied Practice and Site Specificity; and (Counter)Public: Art, Intervention, & Performance in Lower Manhattan from 1978–1993. Since 2016, they have curated critically-acclaimed exhibitions dedicated to the late artist Michael Richards’s art, life, and legacy including Michael Richards: Winged (2019: Stanford University, Stanford, CA; 2016: LMCC, NY, NY), highlighted by New York Times co-chief art critic Holland Cotter as “the most moving show I’ve seen this summer.” At Stanford, they also co-organized the academic symposium “Flight, Diaspora, Identity, and Afterlife: A Symposium on the Art of Michael Richards” featuring nine Stanford professors, and artists Dread Scott and william cordova.

Michael Richards: Are You Down? is possible with lead support from Oolite Arts and major support from the Wege Foundation. We are grateful to the Green Family Foundation and Funding Arts Network. Thanks to Brooke Davis Anderson, Roberta Denning, V. Joy Simmons, M.D., Miami MOCAAD and John Shubin for their generosity. The accompanying monograph is co-published with New York Consolidated and made possible with support from the Furthermore: a program of the J.M. Kaplan Fund. Special thanks to exhibition designer Jarrod Beck, lead preparator Grayson Cox, editors Camille Crain Drummond and Adjua Gargi Nzinga Greaves, conservator Eugenie Milroy, and to Michael Richards’ cousin and steward of his estate, Dawn Dale.

Virtual Curator Tour of Michael Richards: Are You Down? with Melissa Levin & Alex Fialho
Wednesday, April 28
7:00–8:30 PM
Join curators Alex Fialho and Melissa Levin for a virtual tour of the first museum retrospective of Michael Richards’ artwork. Fialho and Levin have been collaborating and engaged with Richards’ art and legacy since 2016. They will highlight Richards’ virtuosic sculpture and drawing practice and incisive thinking, as well as the recurring imagery, themes, and materials that Richards engaged throughout his body of work. Though Richards’ art is certainly of its time in the 1990s, it simultaneously speaks poetically and provocatively to our contemporary moment. In particular, Richards’ artistic engagement with anti-Blackness, masculinity, diaspora, spirituality, police brutality, and fallen monuments is especially urgent and pressing today.

Conversations at MOCA: Michael Richards & the Whitney Independent Study Program with Renee Cox, Lyle Ashton Harris, and Dread Scott
Wednesday, June 16th
7:00–8:30 PM
This dynamic conversation will expand on a formative moment in Michael Richards’ artistic practice and his integral involvement with a group of Black artists emerging in the 1990s. In 1992–1993, Michael Richards participated in the Whitney Independent Study Program—a year-long program for artists and curators that encourages critical study and theoretical inquiry—in New York City, along with artists Dread Scott, Lyle Ashton Harris, and Renee Cox, among others. Moderated by Whitney Museum curator Rujeko Hockley, this conversation will reunite Cox, Harris, and Scott, each of whom, in addition to being friends with Richards, engaged him in their own art-making.

Are You Down? co-directors Dennis Scholl and Juan Matos come together with artist Luis Gispert–who was friends with Michael Richards and is interviewed in the film–for a talkback moderated by Donnamarie Baptiste and a one-time screening of a 30-minute work-in-progress version of their documentary about Michael Richards.

A celebratory event on the date of Michael Richards’ birthday, this film screening and talkback will highlight Richards’ powerful sculpture and drawing practice, the circumstances of his passing on September 11, his friendships, and his enduring influence on cultural communities in New York City, Miami, and beyond.

2021 marks 20 years since Michael Richards’ tragic passing at the age of 38 in the attacks on September 11, 2001. To honor this anniversary, Michael Richards’ cousin Dawn Dale and Michael Richards: Are You Down? co-curators Alex Fialho and Melissa Levin will be in dialogue with filmmaker, visual artist, and curator Tiona Nekkia McClodden to discuss the ongoing work of stewarding artists’ legacies.

Dale has stored and cared for Richards’ artworks for two decades since Richards’ passing; Fialho and Levin have been engaged with curating Richards’ art since 2016; and McClodden has worked with the estates and archives of artists Brad Johnson, Essex Hemphill, and Julius Eastman. Together, their conversation will consider the ongoing work of uplifting underknown Black artists, familial care for those who have passed, and amplifying Richards’ artistic practice in the wake of September 11.

The event title is inspired by Professor Jakeya Caruthers who—in an introduction to the 2019 symposium session on Michael Richards, Art and Its Afterlives—poignantly noted: “Thinking on the fragmented archive of an artist whose impact is often overshadowed by the spectacular terms of his death, this panel marks Michael Richards work present and possible, a living articulation of the past/future thought, a past too easily reduced to being belated, final, or un-alive, a mistake Saidiya Hartman cautiously warns us against in Venus in Two Acts.”

Conversations at MOCA: Book Preview & Celebration for “Michael Richards: Are You Down?”
Wednesday, September 29, 7:00 PM

This exciting event is a preview and celebration of the forthcoming monograph Michael Richards: Are You Down?, scheduled for publication in Spring 2022, and co-published by MOCA North Miami and New York Consolidated (N-Y-C). The public preview brings together Edwidge Danticat—monograph contributor, acclaimed Miami-based author, and MacArthur Fellow—with Camille Crain Drummond—Editorial Director at N-Y-C. Danticat and Crain Drummond will discuss the wide-ranging themes in Michael Richards’ dynamic artistic practice, including references to flight, the Tuskegee Airmen, Caribbean, and African American histories, and more.