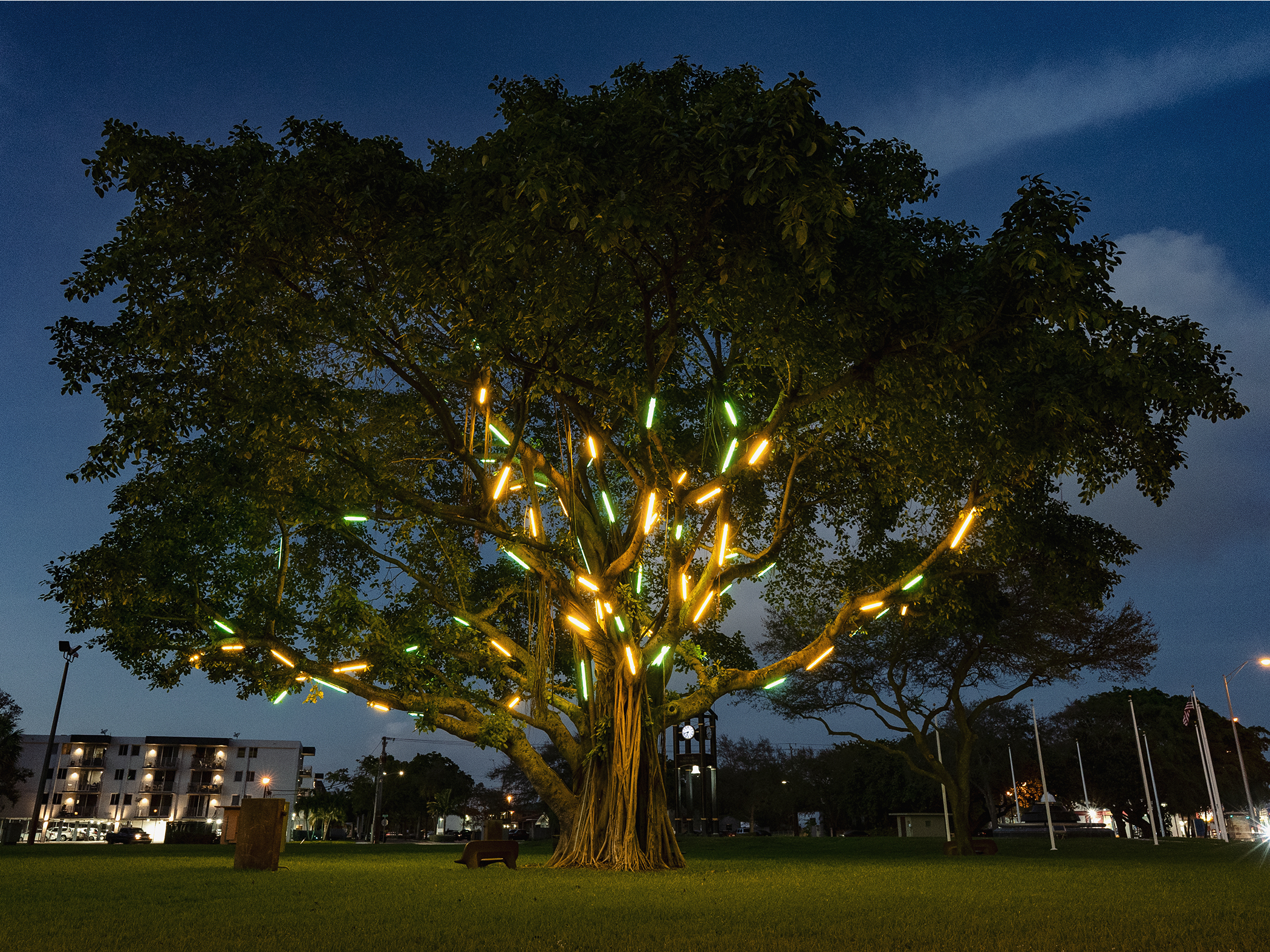 The Museum of Contemporary Art, North Miami is pleased to announce a series of public activations, “Under the Electric Tree” at Griffing Park. Programming will include site-specific performances, live music, hands-on art activities, and more, in conjunction with the recently restored public artwork “Electric Tree” by international renowned artist, Mark Handforth.

“Electric Tree” was first installed just blocks away from MOCA at Griffing Park in 2011, in conjunction with the artist’s major exhibition “Rolling Stop” at the museum. The 2021 restoration of this significant public artwork was made possible with major support from the John S. and James L. Knight Foundation and the City of North Miami and is one of the most important public artworks that MOCA has commissioned in its 25-year history. Handforth’s sculpture traces the branches of a 100-foot-wide banyan tree with brilliantly colored fluorescent tubes that illuminate its understory. The restoration of “Electric Tree” offers arts and culture to a community park that is open year-round.

Handforth graduated from the Academy of Fine Art in Frankfurt and the Slade School of Fine Art in London. He is internationally acclaimed for his large-scale installations in public spaces including Central Park in New York, the Dallas Museum of Art, and the MCA in Chicago, as well as during the FIAC offsite event in Paris. Handforth has also received public commissions from the cities of Paris (Porte de Bagnolet) and Zurich (Tessinerplatz).

public artworks that the museum has commissioned. We are proud to activate the park with consistent programming for all ages at the center of our community,” said Chana Sheldon, executive director of the Museum of Contemporary Art, North Miami. “The initiative launched in April with a concert by Lang Cook Live and Brother Dan of Terrestrial Funk. MOCA welcomed guests as well as food trucks and local vendors. It was a great night! We are deeply grateful for support of the Knight Foundation and the City of North Miami for this initiative.”

“Mark Handforth’s ‘Electric Tree’ is an innovative and stunning work. I love that Mark has created a way for us to experience the banyan tree 24/7 through his light painting. The ability of artists to interpret the world around them in new ways is endlessly fascinating, and especially so when used to create art that is easily accessible to the public,” said Victoria Rogers, vice president of Knight Foundation’s arts program. “That MOCA’s new programming will connect visual art to great live performances by local talent is a great way to showcase the power of the arts to connect us to each other and to place.” 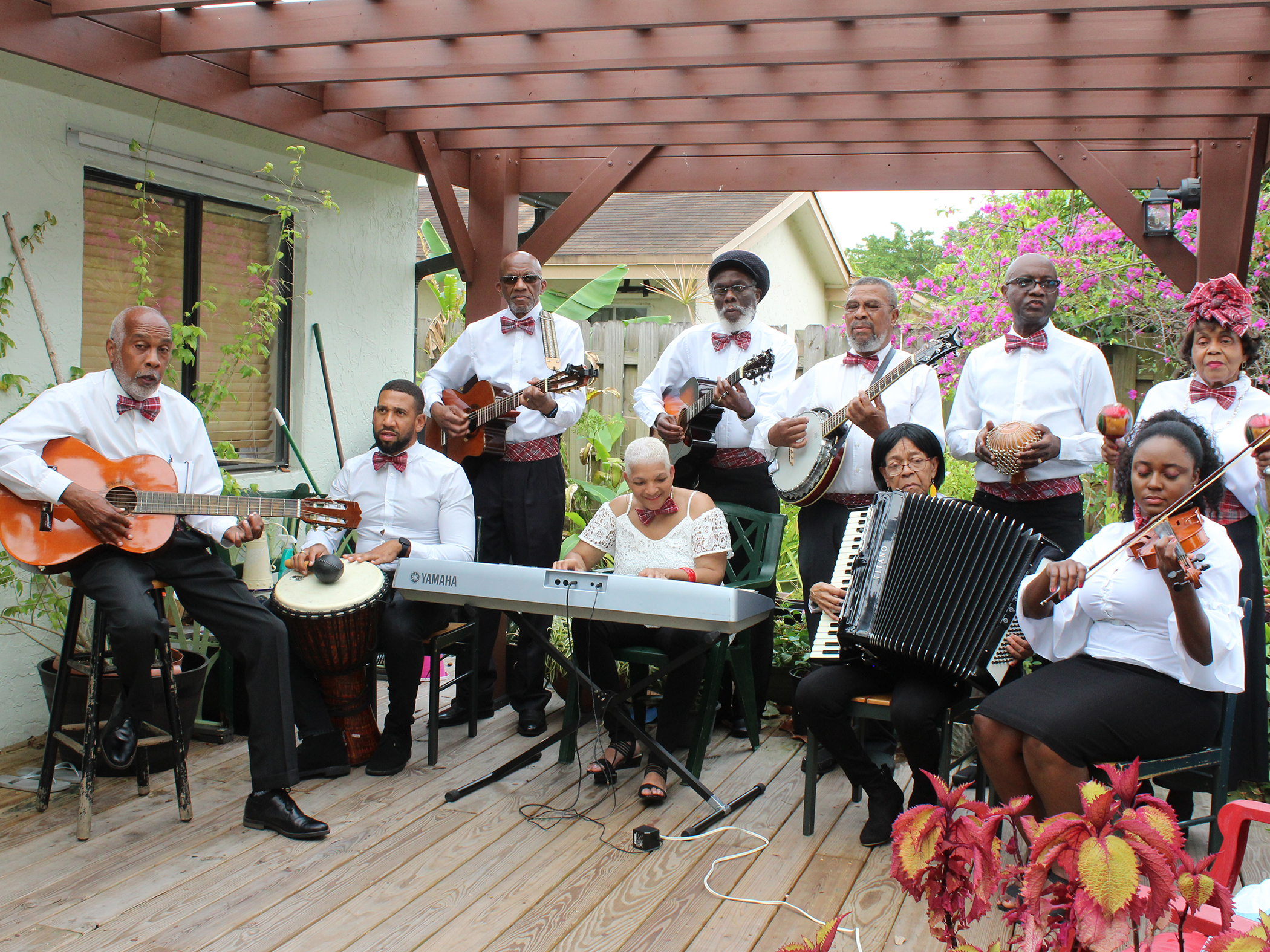 In celebration of Caribbean Heritage Month, MOCA North Miami is proud to feature The Mento Philharmonic Orchestra. Mento is a style of Jamaican folk music that predates and has greatly influenced Ska and Reggae music. Mento typically features acoustic instruments, such as acoustic guitar, banjo, hand drums, and the rhumba box (which is a large mbira in the shape of a box that can be sat on while played.) The rhumba box carries the bass part of the music.

Tallawah Mento Band is a Florida-based Jamaican Mento Band founded with four of the original members of the Jamaica Folk Revue. Tallawah adds its particular flavor to the music of several genres, including the music of Haiti, Cuba, Trinidad and many loved hits from the 50’s and 60’s. With the addition of internationally acclaimed jazz guitarist Keith Stoddart, formerly of the Jamaican Jazz Band “The Sonny Bradshaw Seven,” the band has extended its repertoire to include old jazz, classical, popular, and soca/calypso. The group has entertained all over the USA, and recently in Jamaica, and has won numerous accolades. They have also been featured on NBC 6 Television, Radio Waves, Mystic Radio, and Radio WOKB 1600, in Orlando. 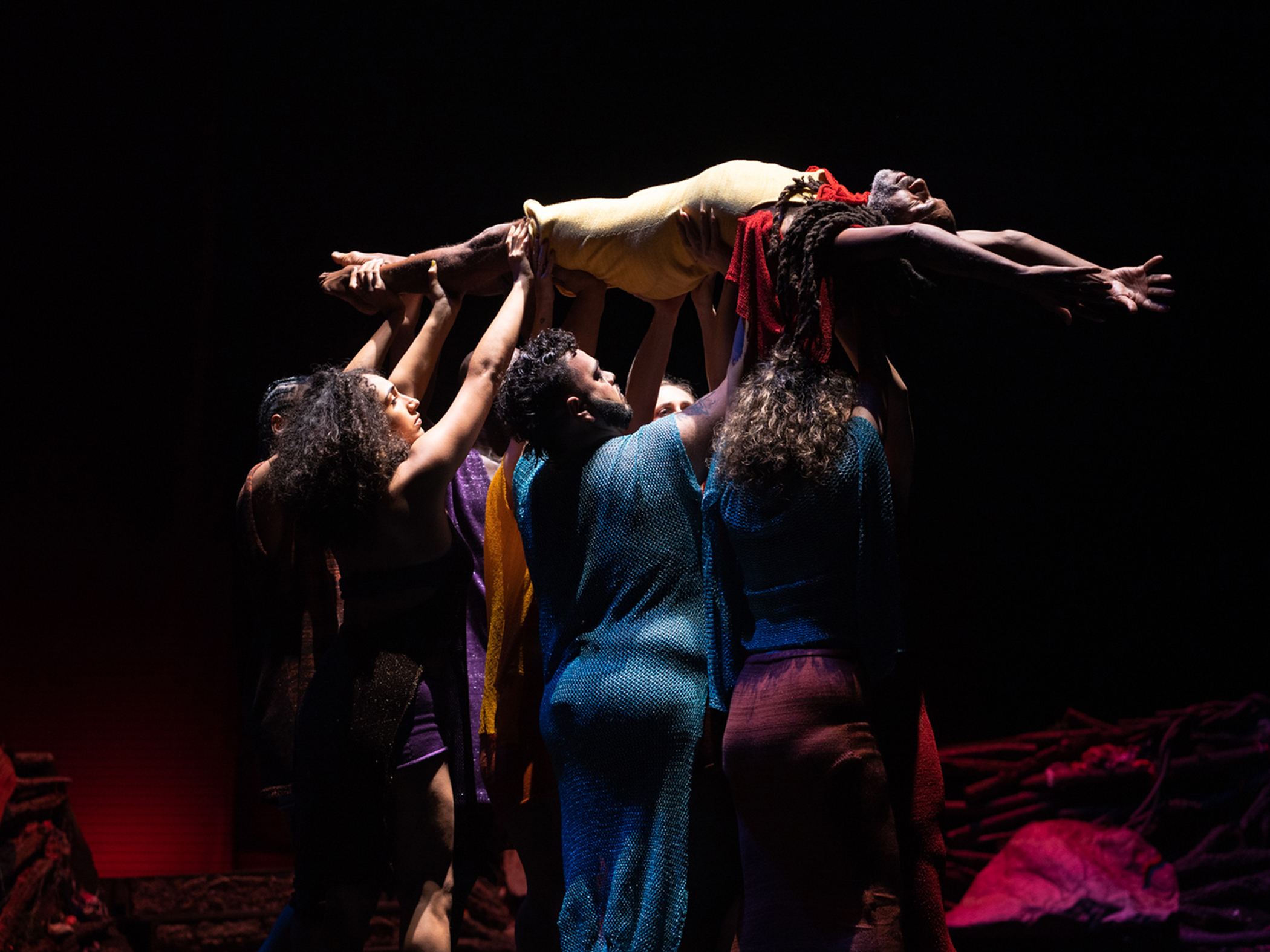 Choreographer Pioneer Winter and sound artist Juraj Kojs will collaborate with performers and community members on a Pride Month activation at the Electric Tree. Collected oral histories and elder stories of ‘first prides’ will become an interactive soundscape for dancers to embody themes of memory, resilience, and community – reflecting on the Electric Tree created by artist Mark Handforth as a meeting place for corporeal and social exchange.