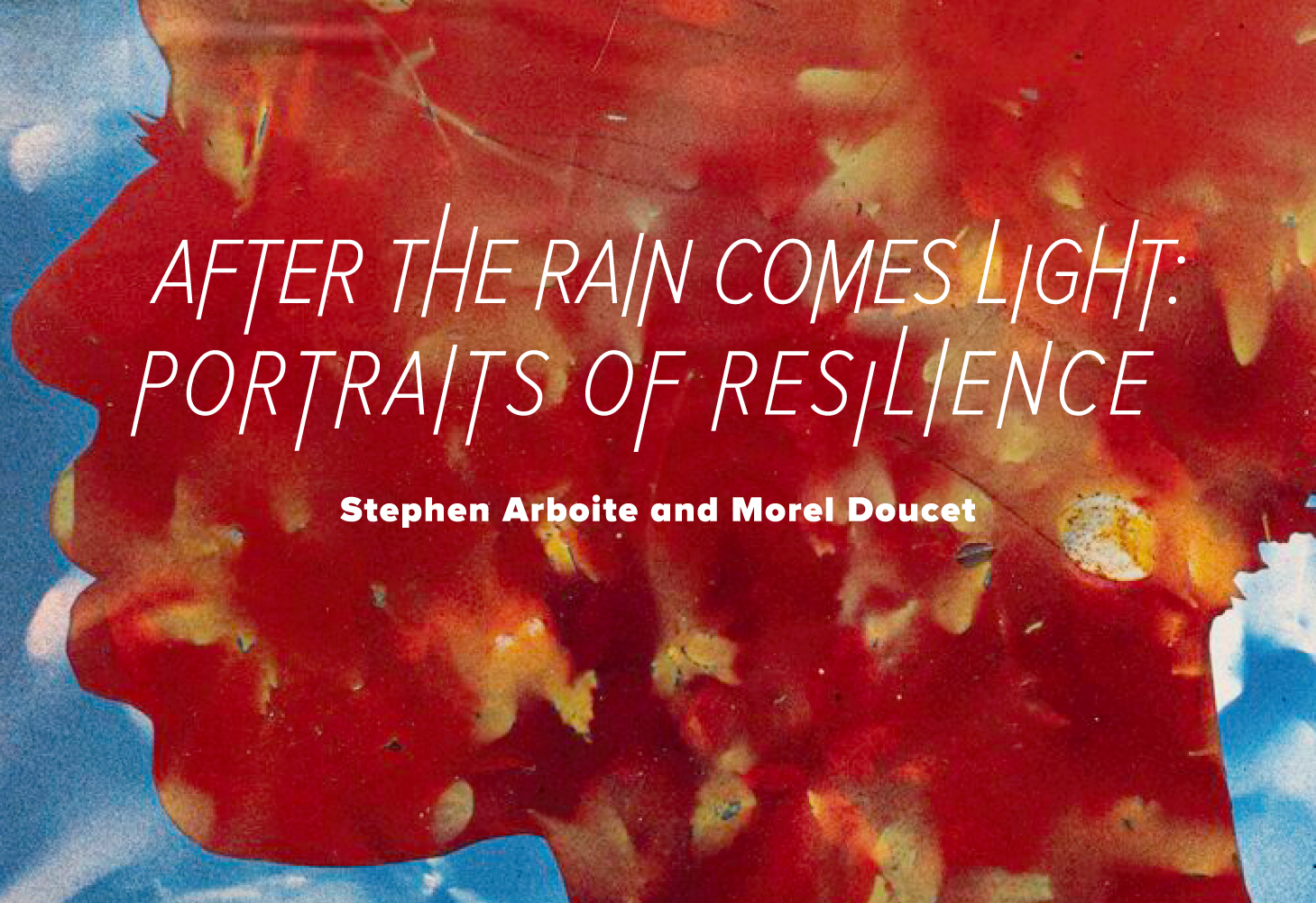 After the Rain Comes Light: Portraits of Resilience is the first collaborative museum exhibition by Miami-based artists, Morel Doucet and Stephen Arboite. Taking as inspiration the flora, fauna, and people of North Miami, each artist brings their unique practice to a series of nine collaborative portraits. The exhibition was derived from a social media open call to North Miami residents and visitors to share their own portraits. Doucet and Arboite then created the nine collages based on these submissions, incorporating local plants, leaves, and flowers from the neighborhood’s streets and green spaces. The gesture of meshing the silhouettes of individuals with local greenery produces both a tender yet firm position of intention, identity, and place, a reaction against the accelerated pace of development that aggressively seeks new land and causes displacement.

Doucet, a graduate of New World School of the Arts with the Distinguished Dean’s Award for Ceramics, showcases here his two-dimensional practice. The works are created using mylar, aerosol paint, ink, indigenous plants, and coffee filters, and build upon a trajectory in Doucet’s body of work which tracks and reveals the conflicts of what he calls “climate-gentrification.” His artwork celebrates the uniqueness and beauty of the African diaspora within Miami’s historically African American neighborhoods—Little Haiti, Overtown, Allapattah, and Liberty City—and over the past several years, Doucet has gathered various flora and fauna from these communities to create ecological drawings in the forms of abstract portraiture of the residents that live in these districts.

Arboite brings to these portraits delicate linework, composition, and a sensitivity to texture honed through his studies at Purchase College for Drawing and Painting in New York State. At times, the surfaces of his works appear to be derived through alchemy, with natural cracking and fissures resembling the baked surface of the earth or geological crystallizations caused by ancient chemical reactions. Similarly enigmatic, the titles of the works cannot be overlooked as colors and forms emerge through their poetic sensibility: The seeker under the sun, Today I saw the water, and it brought me closer to self, To walk in Midnight Veil and Shades of Sapphire, To Glow Under the Rose Moon, and Caramelized Brown Skin Dances in Sultry Summer.

Large-scale flags of the portraits were created as part of MOCA’s Art on the Plaza series to activate the plaza during Haitian Heritage Month, transforming the museum’s entrance into a space for joy and reflection. Each flag was attached to a palm tree, soaring to the sky and proclaiming a presence: we are here. Together, Doucet and Arboite have gathered messages of celebration, strength, identity, magic, and survival, messages that communicate the phenomenon of the shimmering bark of a Gumbo-Limbo tree, or fiery blooms of a Royal Poinciana thriving from a crack in a sidewalk, its green leaves absorbing the energy from the sun.

Morel Doucet (b. 1990) is a Miami-based multidisciplinary artist and arts educator that hails from Haiti. He employs ceramics, illustrations, and prints to examine the realities of climate-gentrification, migration, and displacement within the Black diaspora communities. Through a contemporary reconfiguration of the black experience, his work catalogs a powerful record of environmental decay at the intersection of economic inequity, the commodification of industry, personal labor, and race. Doucet Emmy-nominated work has been featured and reviewed in numerous publications, including Vogue Mexico, Oxford University Press, Hyperallergic, Biscayne Times, and Hypebeast. He graduated from the New World School of the Arts with the Distinguished Dean’s Award for Ceramics. From there, he continued his studies at the Maryland Institute College of Art, receiving his BFA in Ceramics with a minor in creative writing and a concentration in illustration. Doucet has exhibited extensively in prestigious national and international institutions, including the Havana Biennial; the African Heritage Cultural Arts Center, Miami, FL; National Council on Education for Ceramic Arts, Pittsburgh, PA; American Museum of Ceramic Art, Pomona, CA; Museum of Contemporary Art North Miami; Flaten Art Museum, St. Olaf College, Haitian Heritage Museum, Miami, FL and Patricia & Phillip Frost Art Museum, Miami, FL.

Stephen Arboite (b. 1987), of Haitian descent, was born and raised in New York City and now resides in Miami, Florida. Arboite’s work considers beauty outside of classical aesthetic paradigms, and places an emphasis on spiritual transformation and evolution of human consciousness. Arboite attended State University of New York, Purchase College for drawing and painting. He has exhibited nationally, including a debut solo exhibition with N’Namdi Contemporary in Miami, Prizm Art Fair, SCOPE NY/MIA, and is currently in a group show entitled Diverse Networks at Oolite Arts.