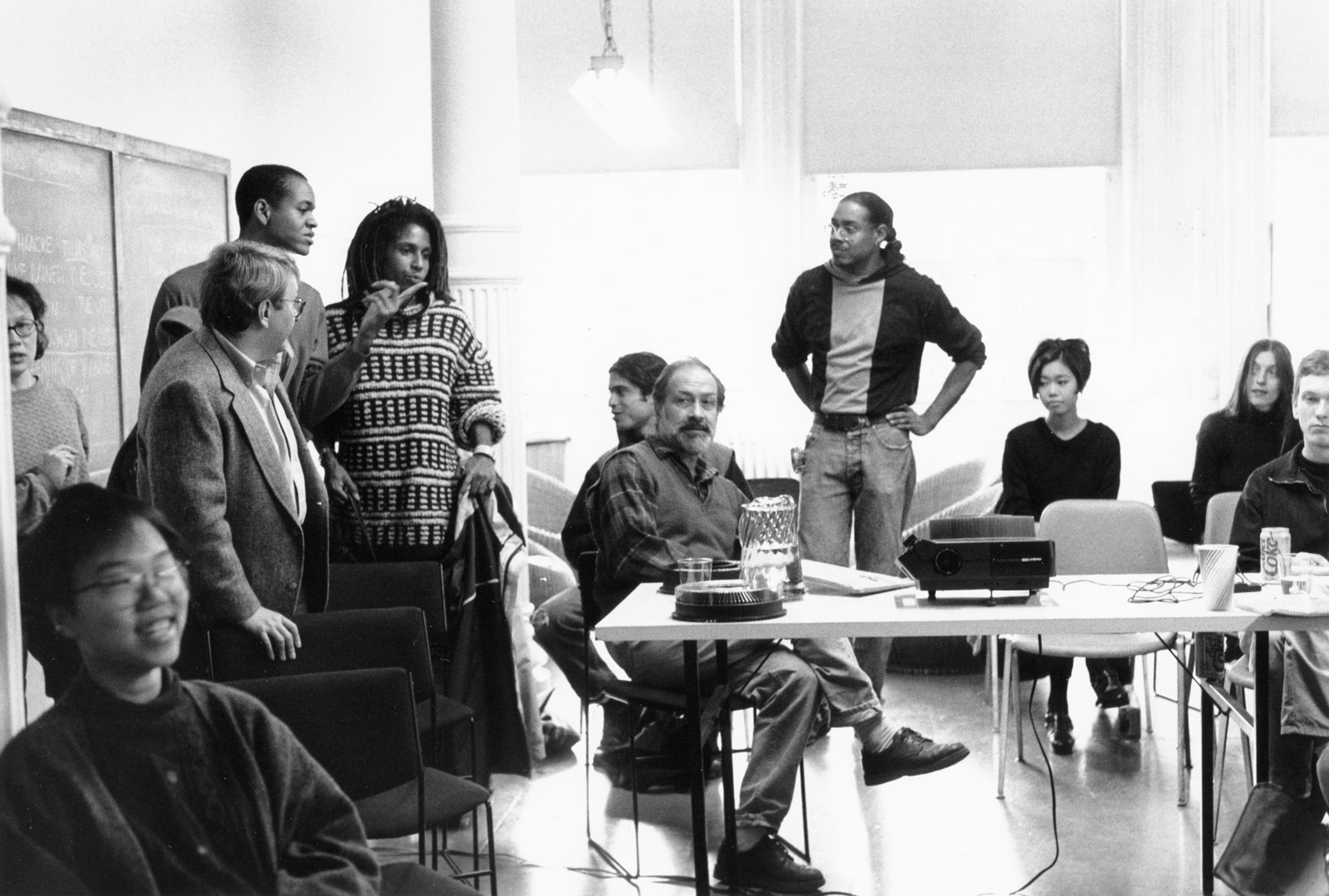 This dynamic conversation will expand on a formative moment in Michael Richards’ artistic practice and his integral involvement with a group of Black artists emerging in the 1990s. In 1992–1993, Michael Richards participated in the Whitney Independent Study Program—a year-long program for artists and curators that encourages critical study and theoretical inquiry—in New York City, along with artists Dread Scott, Lyle Ashton Harris, and Renee Cox, among others. Moderated by Whitney Museum curator Rujeko Hockley, this conversation will reunite Cox, Harris, and Scott, each of whom, in addition to being friends with Richards, engaged him in their own art-making.

Dread Scott is an interdisciplinary artist who for three decades has made work that encourages viewers to re-examine cohering ideals of American society. In 1989, the US Senate outlawed his artwork and President Bush declared it “disgraceful” because of its transgressive use of the American flag. Dread became part of a landmark Supreme Court case when he and others burned flags on the steps of the Capitol. He has presented a TED talk on this. His art has been exhibited at MoMA/PS1, The Walker Art Center, Jack Shainman Gallery and street corners across the country.  He is a 2019 Open Society Foundations Soros Equality Fellow and has received fellowships from United States Artists and Creative Capital Foundation. In 2019, he presented Slave Rebellion Reenactment, a public performance, which was featured in Vanity Fair, The New York Times and on Christiane Amanpour on CNN. His art is included in the collection of the Whitney Museum.

Lyle Ashton Harris: Lyle Ashton Harris has cultivated a diverse artistic practice ranging from photography and collage to installation and performance art. His work explores intersections between the personal and the political, examining the impact of ethnicity, gender, and desire on the contemporary social and cultural dynamic. Harris is represented in the permanent collections of renowned institutions and has been widely exhibited internationally, including most recently in “Photography’s Last Century” at the Metropolitan Museum of Art, New York; in “Basquiat’s ‘Defacement’: The Untold Story’’ and “Implicit Tensions: Mapplethorpe Now” at the Solomon R. Guggenheim Museum, New York, among many others. Harris lives and works in New York, serving as a Professor of Art at New York University.

Renee Cox (b. 1960, Colgate, Jamaica; lives in  New York) makes photographs, collages, and installations that draw on art history, fashion photography and popular culture. Her work invokes a critical vision of female sexuality, beauty, power and heroism through nudity, religious imagery and symbolism that inform her interdisciplinary process. She is most noted for her larger than life photographs of female bodies. She reexaminations the black female figure in the context of structures of power. Inspired by critical epochs and artistic styles, her works are often reimaginations of art history, ranging from the Italian Renaissance such as Michelangelo and Leonardo da Vinci, to Cubism (Picasso), Modernism (Édouard Manet) to traditional West African Art (Dogon, Mali, Cross River section of Nigeria). Cox utilizes a mélange of photographic styles in the vein of fashion photographer Richard Avedon, German portrait photographer August Sander, as well as summoning Harlem Renaissance photographic practices, inspired by James Van Der Zee, Gordon Parks to the obscure ritualistic three-dimensional sculptural collages of Bettye Saar. Cox’s work is a celebration of the spectrum of the black female body. Her work challenges how women are seen respective to time, place and the intangible spaces between representation and reality.

Renee Cox received her BA from Syracuse University, (Syracuse, NY) and MFA from the School of Visual Arts, (New York, NY). She was a participant in the Whitney Museum of American Art, Independent Study Program, (New York, NY). Her work has been included in solo and group exhibitions at prominent institutions to include Tate Liverpool (Liverpool, UK), The New Museum of Contemporary Art (New York, NY), Brooklyn Museum (Brooklyn, NY), and Harvard University (Cambridge, MA) and the Whitney Museum of American Art (New York, NY) to name a few. She received the Artists Fellowship Award, New York Foundations for the Arts, The MacDowell Colony, (Petersborough, NY) and the Aaron Matalon Award, The National Gallery of Jamaica (Kingston, Jamaica) among others. She is an associate professor at Columbia University and has lectured at Yale College of Art (New Haven, CT), New York University (New York, NY) and Parsons School of Design (New York, NY) to name a few. She lives and works in Manhattan and Amagansett with her husband,and their dog, Dogon.

Moderator bio:
Rujeko Hockley is an assistant curator at the Whitney Museum of American Art. She is the curator of the mid-career survey Julie Mehretu, which opened in March 2021, and co-curated the 2019 Whitney Biennial. Additional projects at the Whitney include Toyin Ojih Odutola: To Wander Determined (2017) and An Incomplete History of Protest: Selections from the Whitney’s Collection, 1940-2017 (2017). Previously, she was Assistant Curator of Contemporary Art at the Brooklyn Museum, where she co-curated Crossing Brooklyn: Art from Bushwick, Bed-Stuy, and Beyond (2014) and was involved in exhibitions highlighting the permanent collection as well as artists LaToya Ruby Frazier, The Bruce High Quality Foundation, Kehinde Wiley, Tom Sachs, and others. She is the co-curator of We Wanted a Revolution: Black Radical Women, 1965-85 (2017), which originated at the Brooklyn Museum and travelled to three U.S. venues in 2017-18. She serves on the Board of Art Matters, as well as the Advisory Board of Recess.

Michael Richards: Are You Down? is possible with lead support from Oolite Arts and major support from the Wege Foundation. We are grateful to the Green Family Foundation and Funding Arts Network. Thanks to Brooke Davis Anderson, Roberta Denning, V. Joy Simmons, M.D., Miami MOCAAD and John Shubin for their generosity. The accompanying monograph is co-published with New York Consolidated and made possible with support from the Furthermore: a program of the J.M. Kaplan Fund.