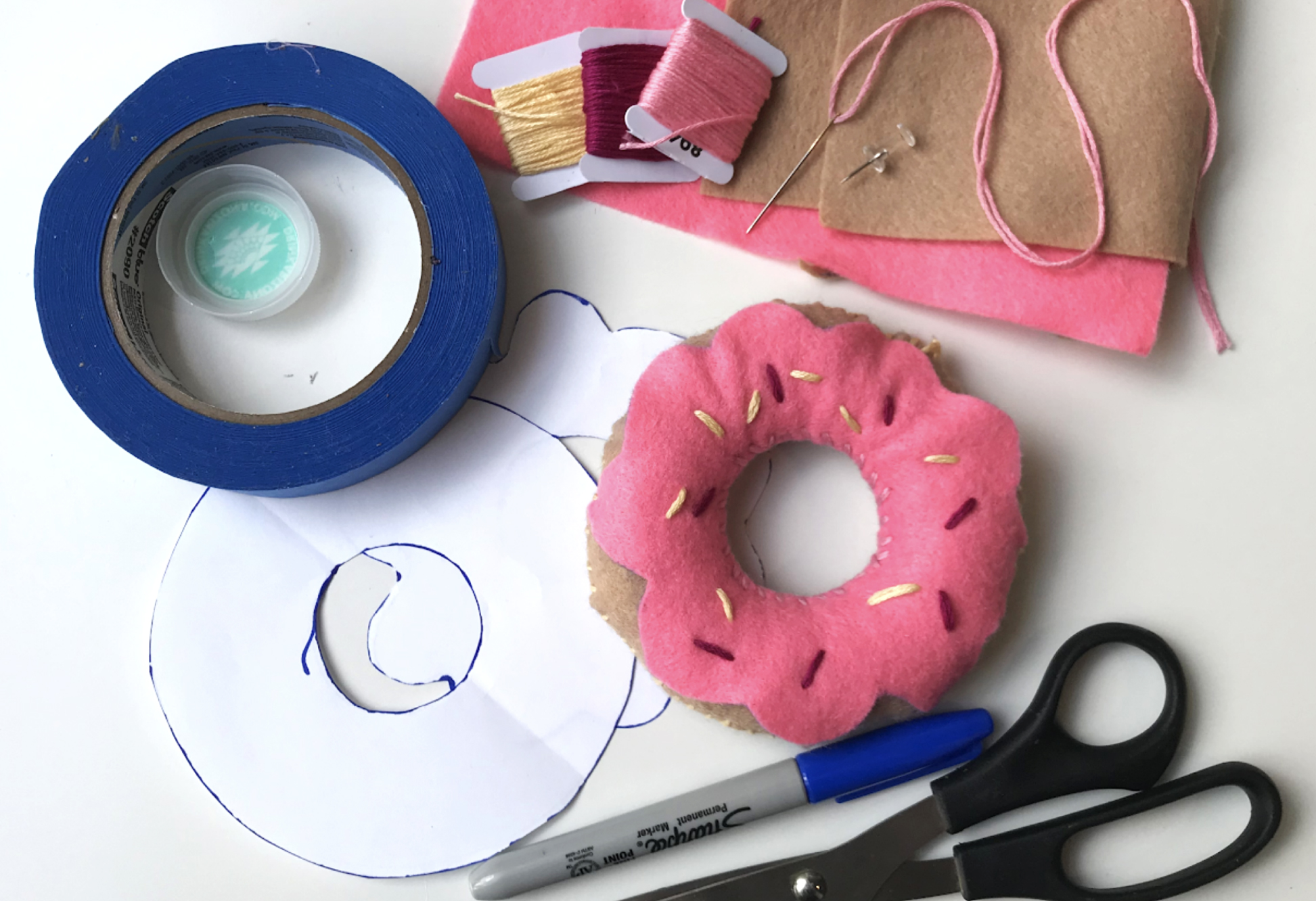 We’re happy to announce that we’ll be continuing our MOCA Fun Fridays by showcasing one of our Virtual Summer Camp Projects.

For this project, we’ll be creating our own felt donut pillow, inspired by the artwork of contemporary ceramicist, Jae Young Kim. 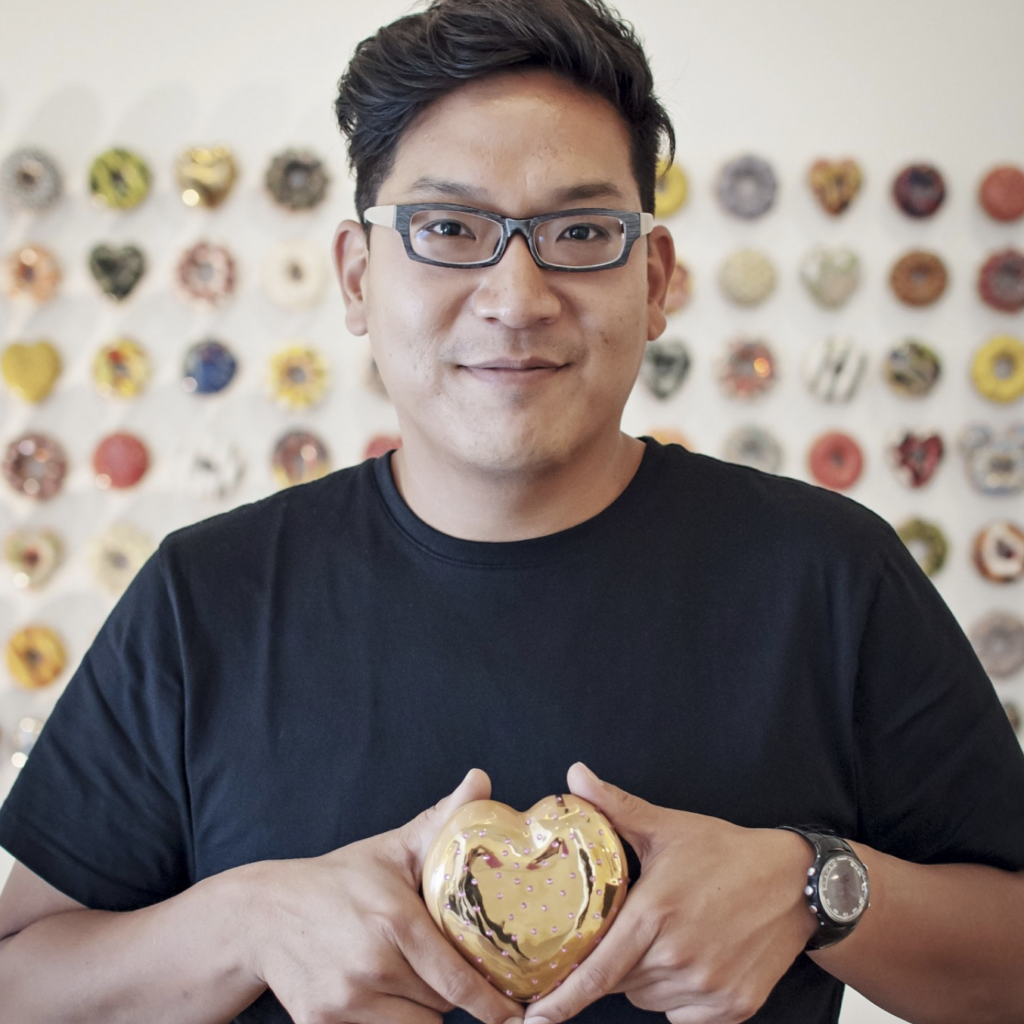 Jae Young Kim grew up mostly in South Korea, but moved around a lot in his youth. He started making donuts because they made him happy. In his words “donuts are a treat, but they aren’t all good. Donuts, sweets and junk food are typical fare for those living in poverty or just above it. Cheap and yummy, donuts also give a quick burst of energy which lets you keep going. They can also provide a satisfying balm when life and trying to get by is difficult.”

I loved this idea of creating something that would make us happy, and as I don’t have access to a kiln for ceramics, I thought it would be a great time to teach the Summer Camp the basics of sewing. 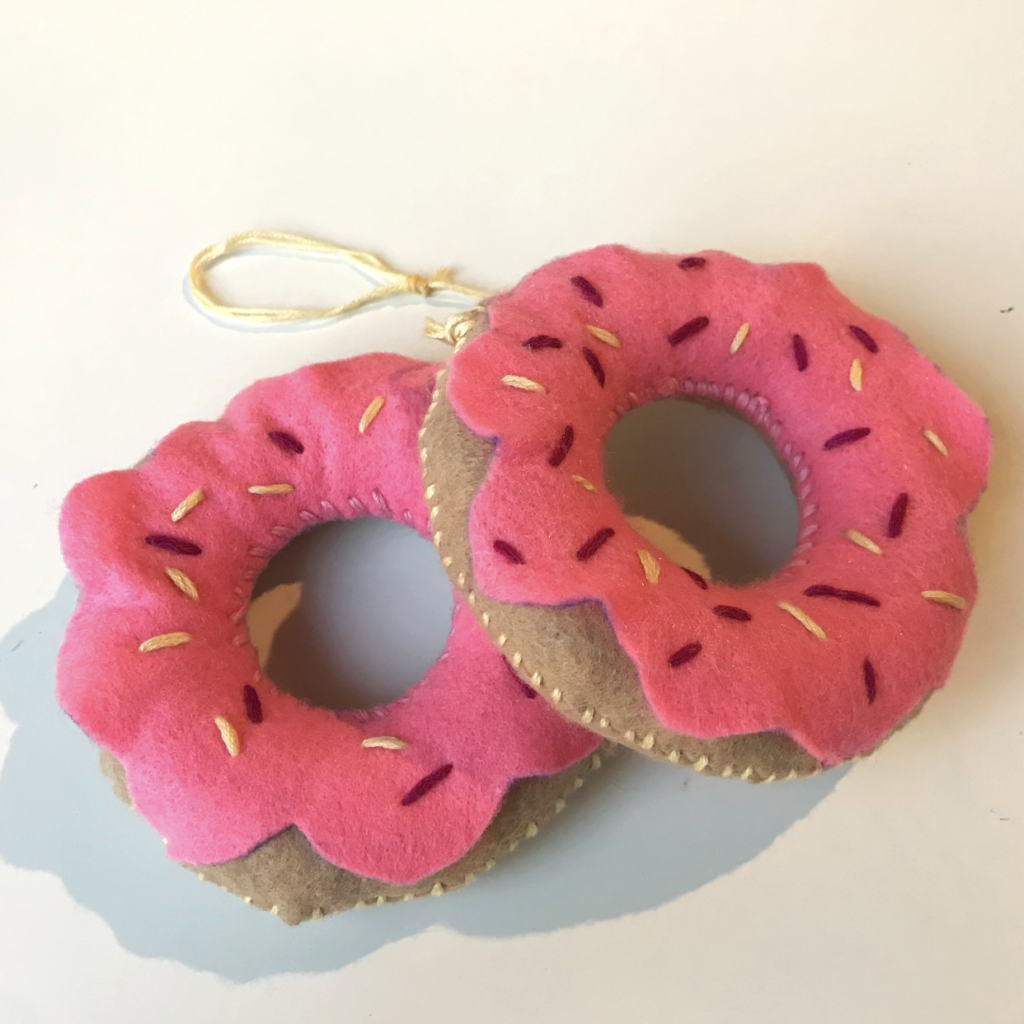 Two circles for stencils, like a bottle cap and a roll of tape
Two different colors of felt
Three or more colors of embroidery thread
A needle (if you’re working with a blunted needle, I also recommend having a thumbtack handy)
Stuffing
Paper
A marker
Scissors 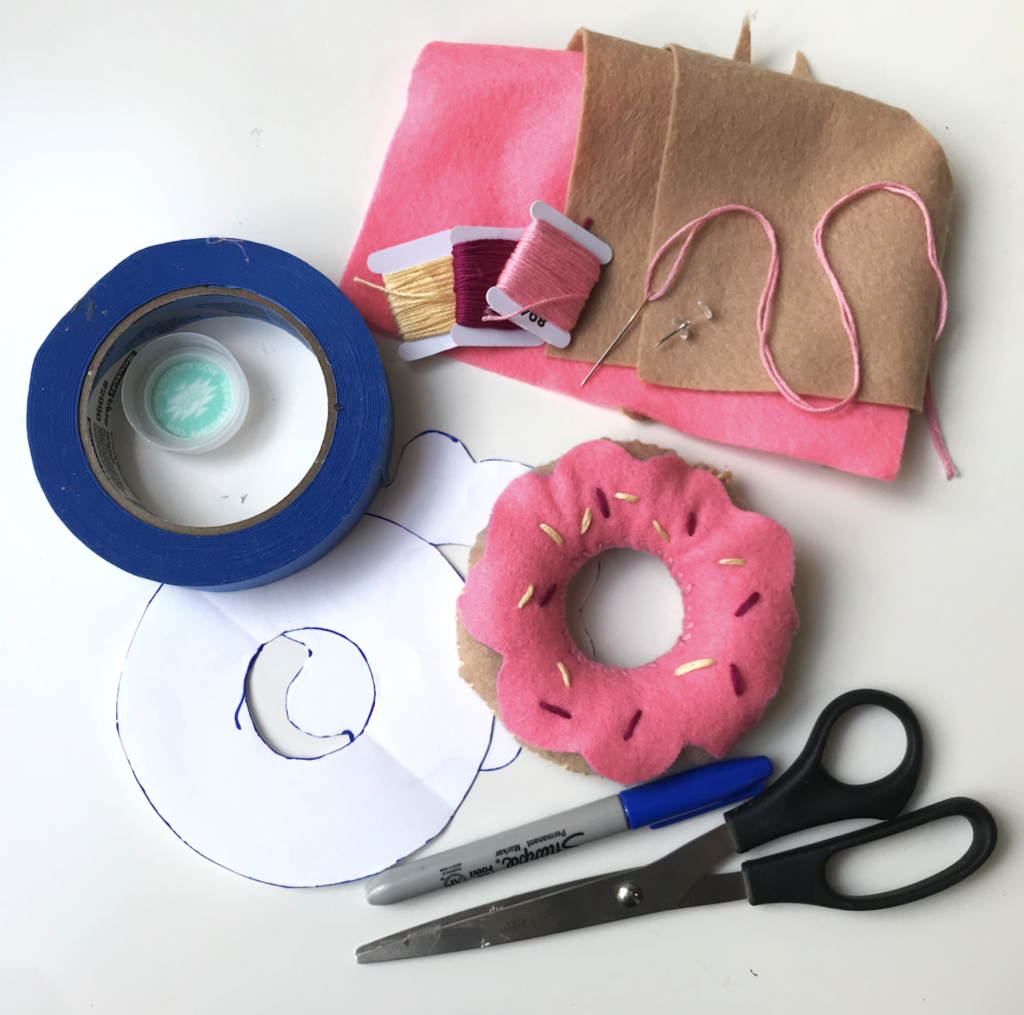 First, use your stencils to draw a donut shape onto your paper and cut it out. Then use your paper stencil to draw two identical shapes on your felt with a marker. 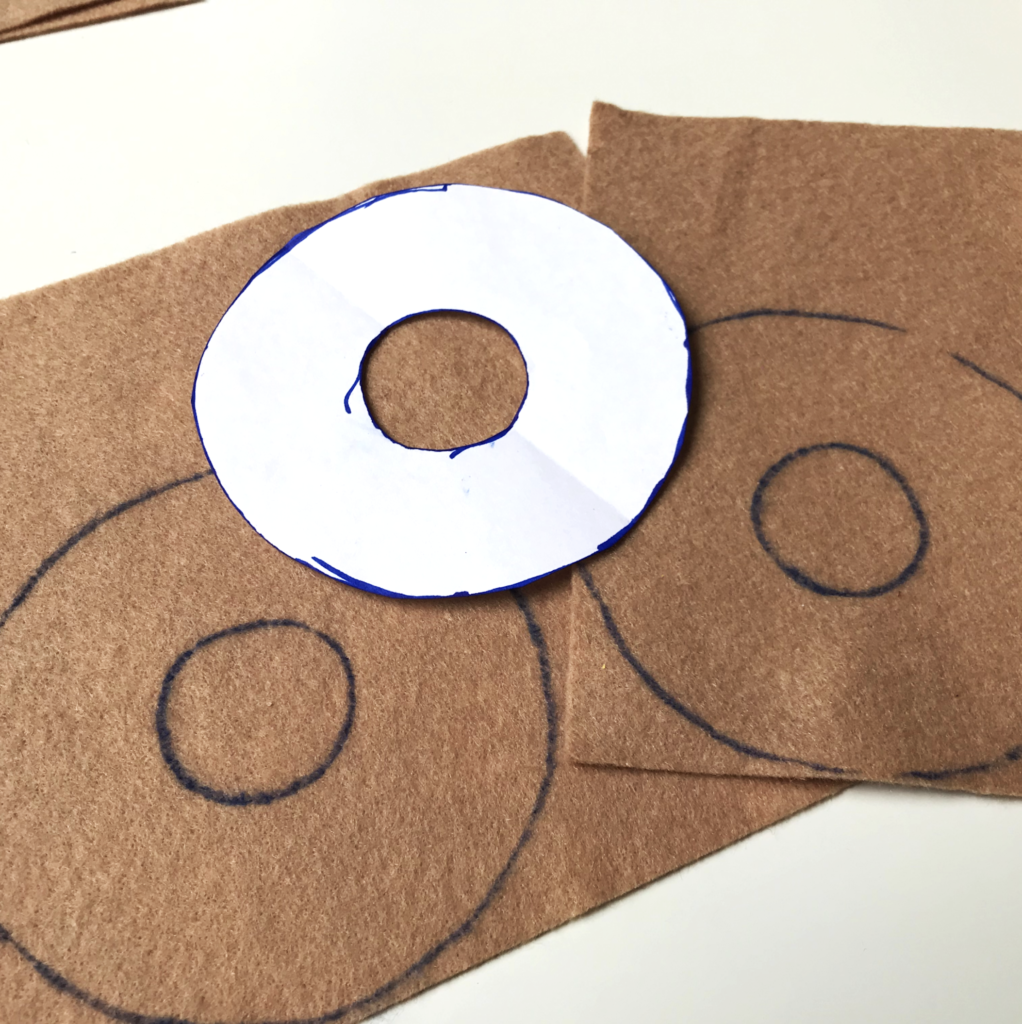 Then cut a wavy pattern into your paper stencil, and use that to draw the “frosting” on another color of felt. 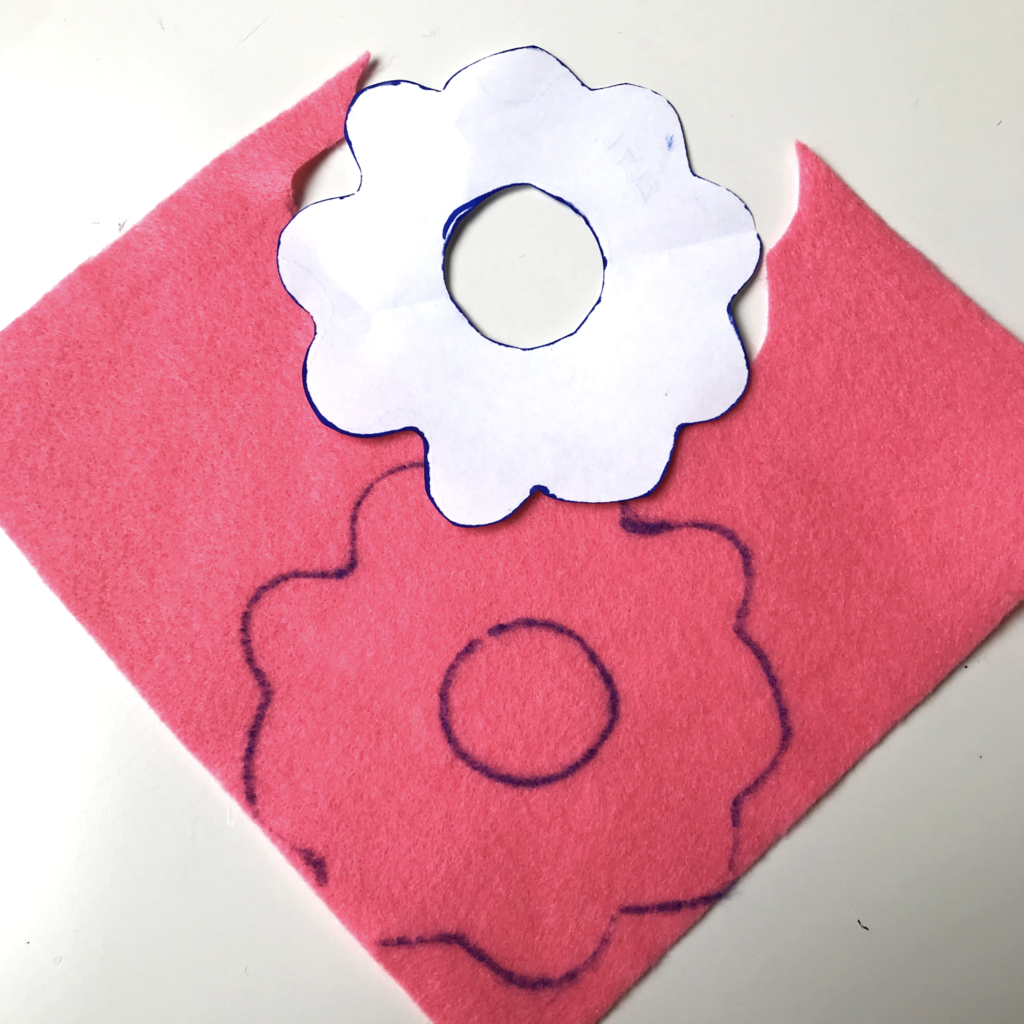 Cut all your shapes out, to cut the center of the circles I like to fold the felt and cut a slit into the center, then you can get your scissors in to cut the circle out! 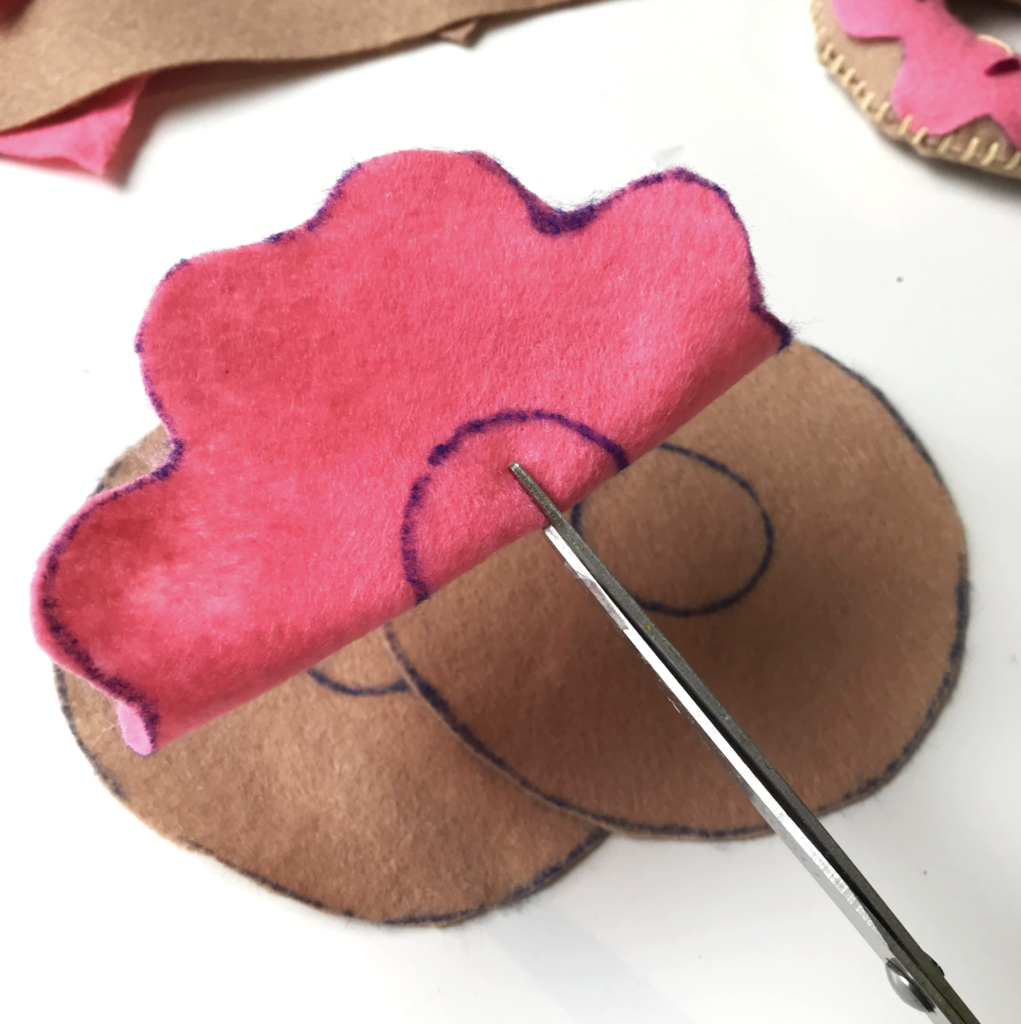 You should have three pieces of cut out felt now! 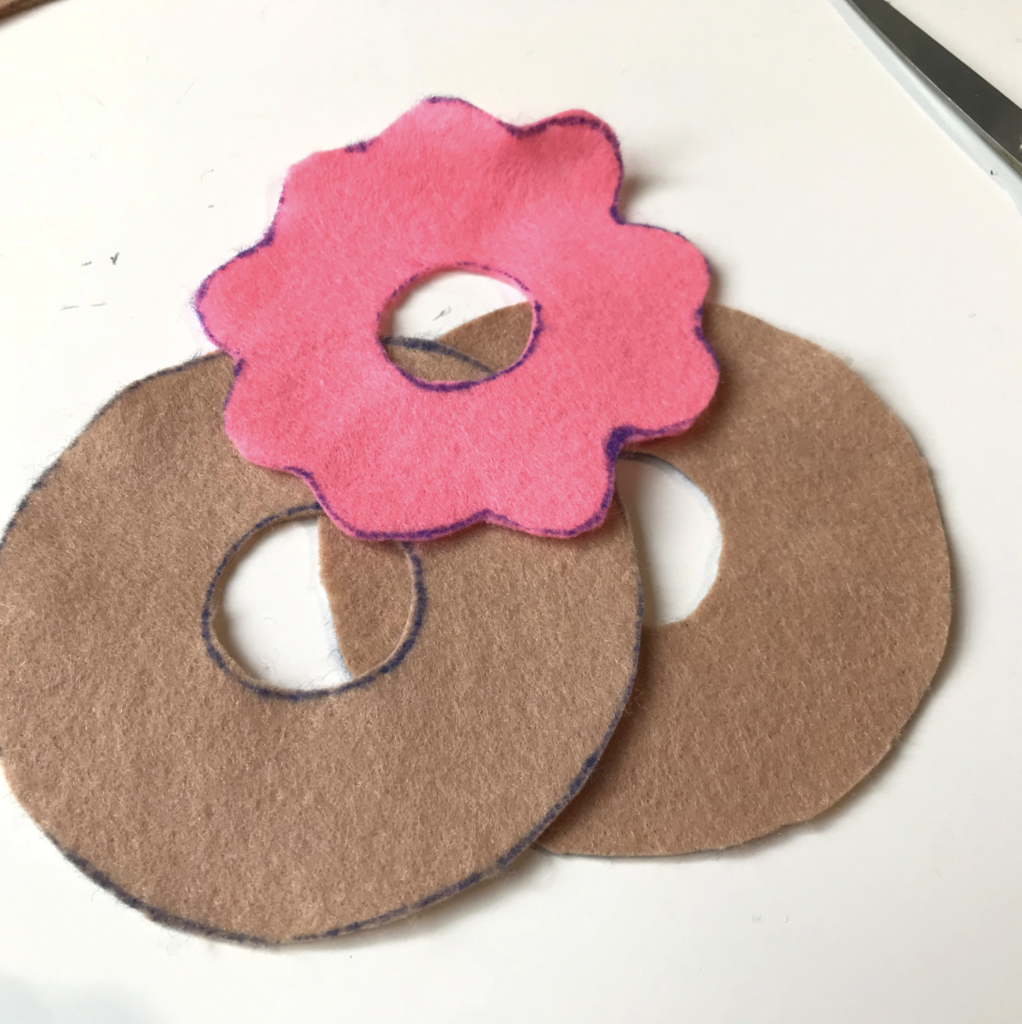 Next, it’s time to thread your needle, if you’re using embroidery thread like I am, it can be pretty tough to get the thread through, so I use this little trick. Take a piece of tape, and put your thread into the middle of the tape, then fold it over. Trim the tape into a point, and use that point to push the thread into the eye of the needle.

Now it’s time to make the “sprinkles!”Take your needle and poke it through the back of the donut piece like so.

Pull in through until you hit the knot on your thread. Then sew through the front of the frosting in a straight line the size you’d like for your sprinkle. 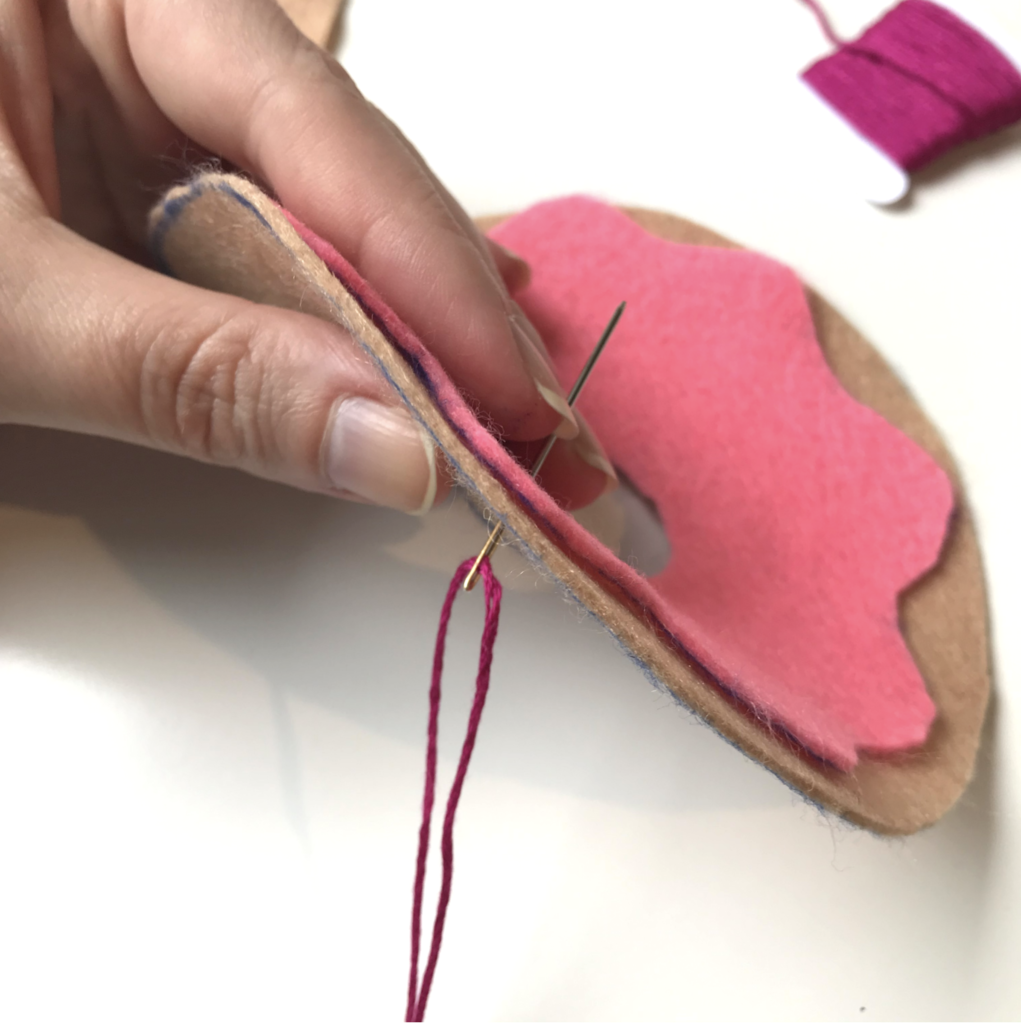 Keep on sewing to make more sprinkles, using a random pattern. The front should look like sprinkles, while the back looks messy.

Tie your string in a knot once you’re done, and you can pick another color, or even add beads or buttons while you’re sewing!

Now it’s time to sew the two donut pieces together. We’re going to sew them in “inside out” so we can flip them the right way at the end. You can use many different types of stitches for this, but I chose to use a simple “whip stitch” because I don’t mind the stitches being visible, and it gave me more room to work.

Put the top of your donut with the nice sprinkles on the inside, on top of the second piece of donut, making sure the marker part is facing out. 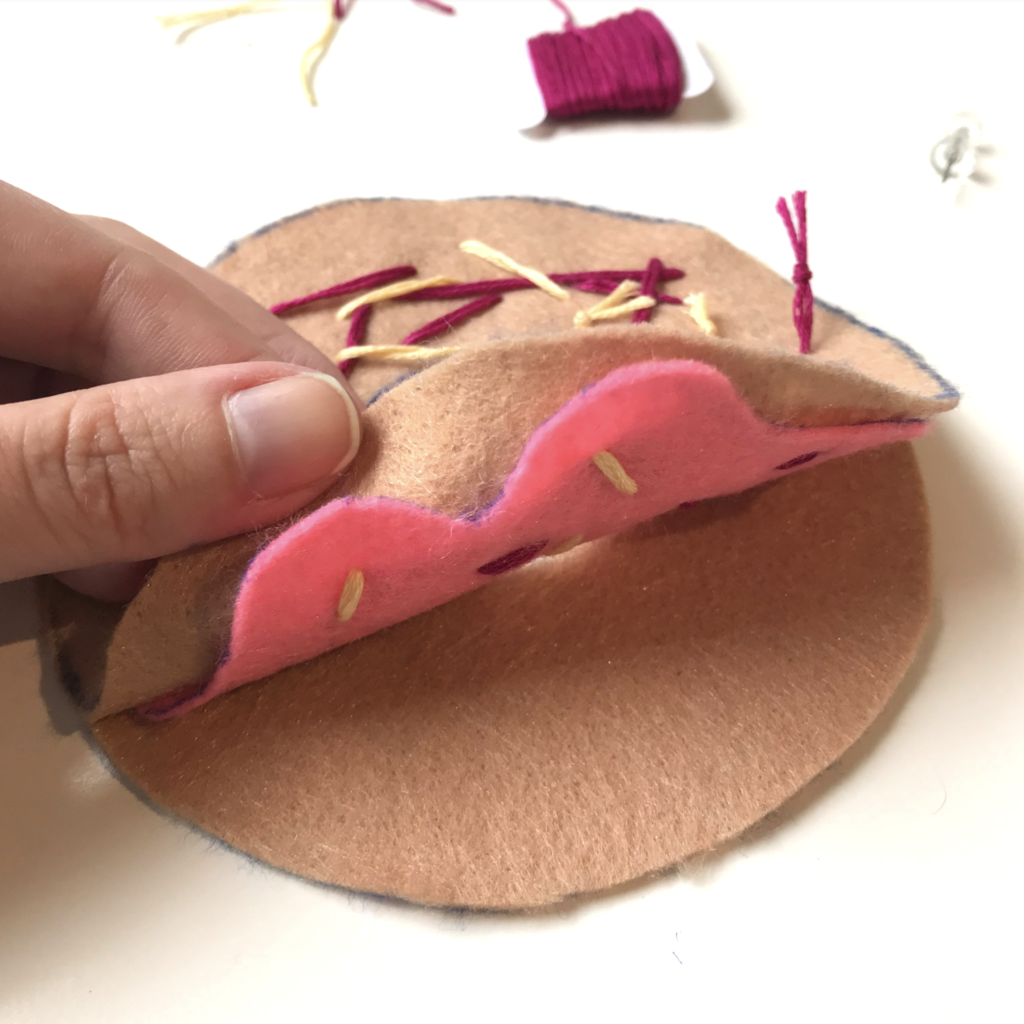 If you’d like, pick an embroidery thread that matches the color of your donut. Poke your needle through both pieces, loop it over, and then poke through from the other side, like below. 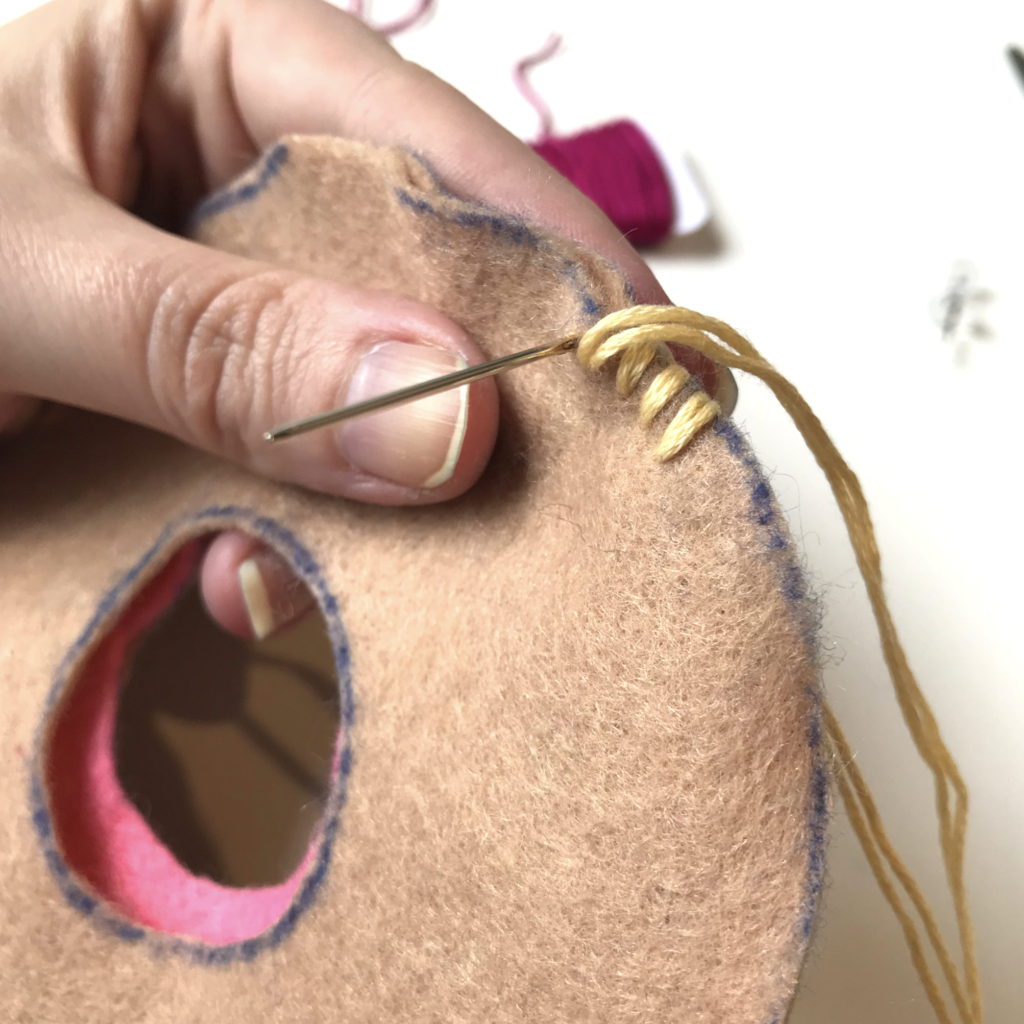 Make sure your stitches are nice and close together, so no stuffing will come out later. Stitch all the way around, only leaving about an inch gap. 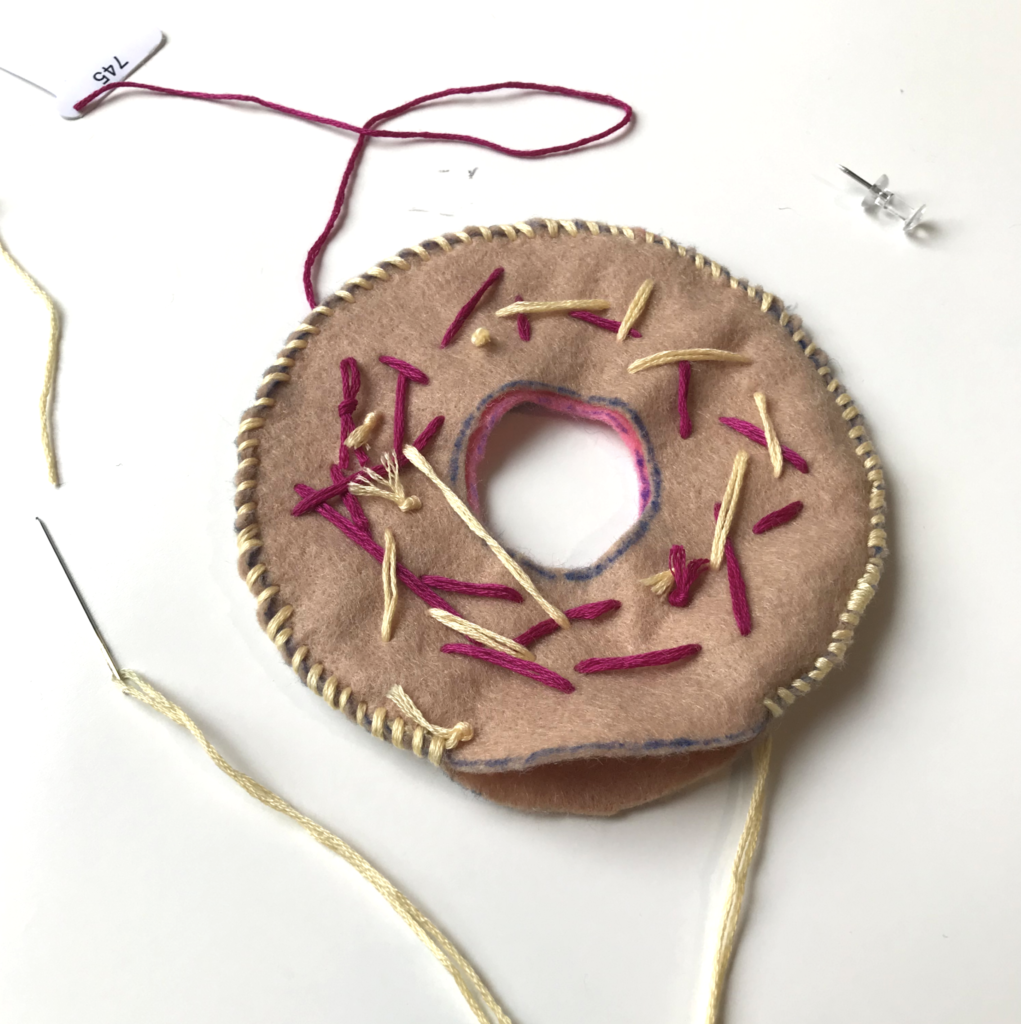 Then, you’re going to push the donut through the hole you left unstitched, until it’s flipped the right side out!

Now it’s time to sew the center hole of the donut, I chose a thread that matched the frosting this time and used the same kind of stitch. A trick to hide the knot is sewing into the inside of the donut first, then stitching normally, as shown.

Stitch all the way around the center of the donut, making sure your stitches are as close together as possible. 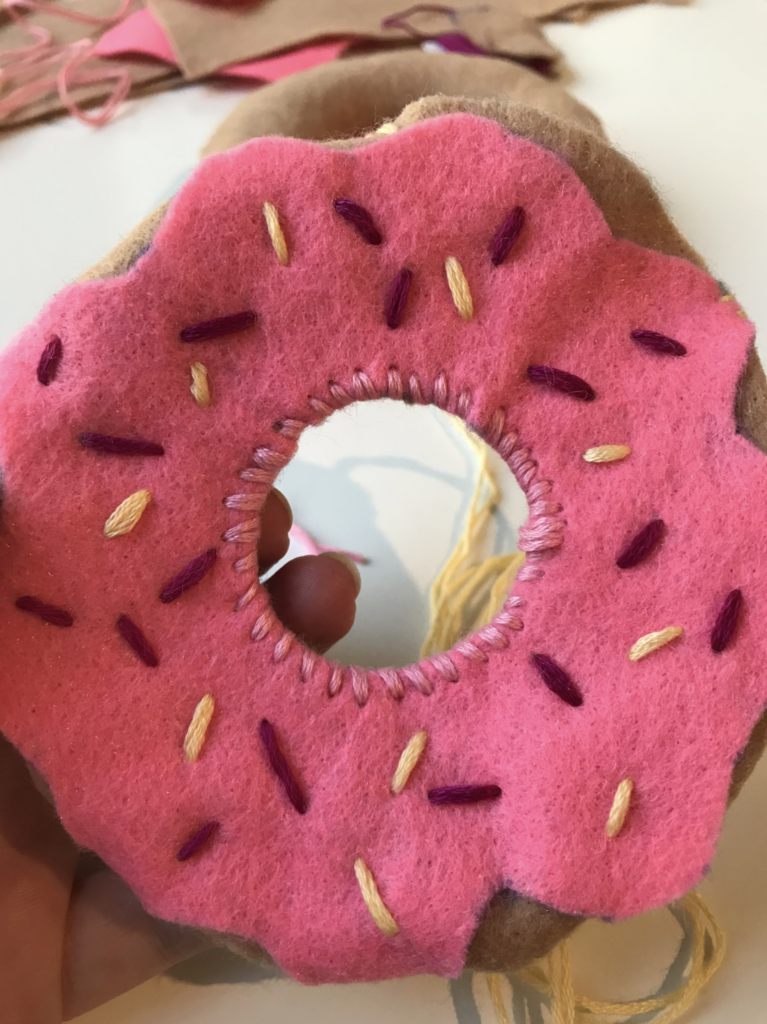 Now it’s time to sew the center hole of the donut, I chose a thread that matched the frosting this time and used the same kind of stitch. A trick to hide the knot is sewing into the inside of the donut first, then stitching normally, as shown.

Finally, stitch your donut closed! You can either tie it off close to the donut, or leave some string in case you want to hang up your donut. 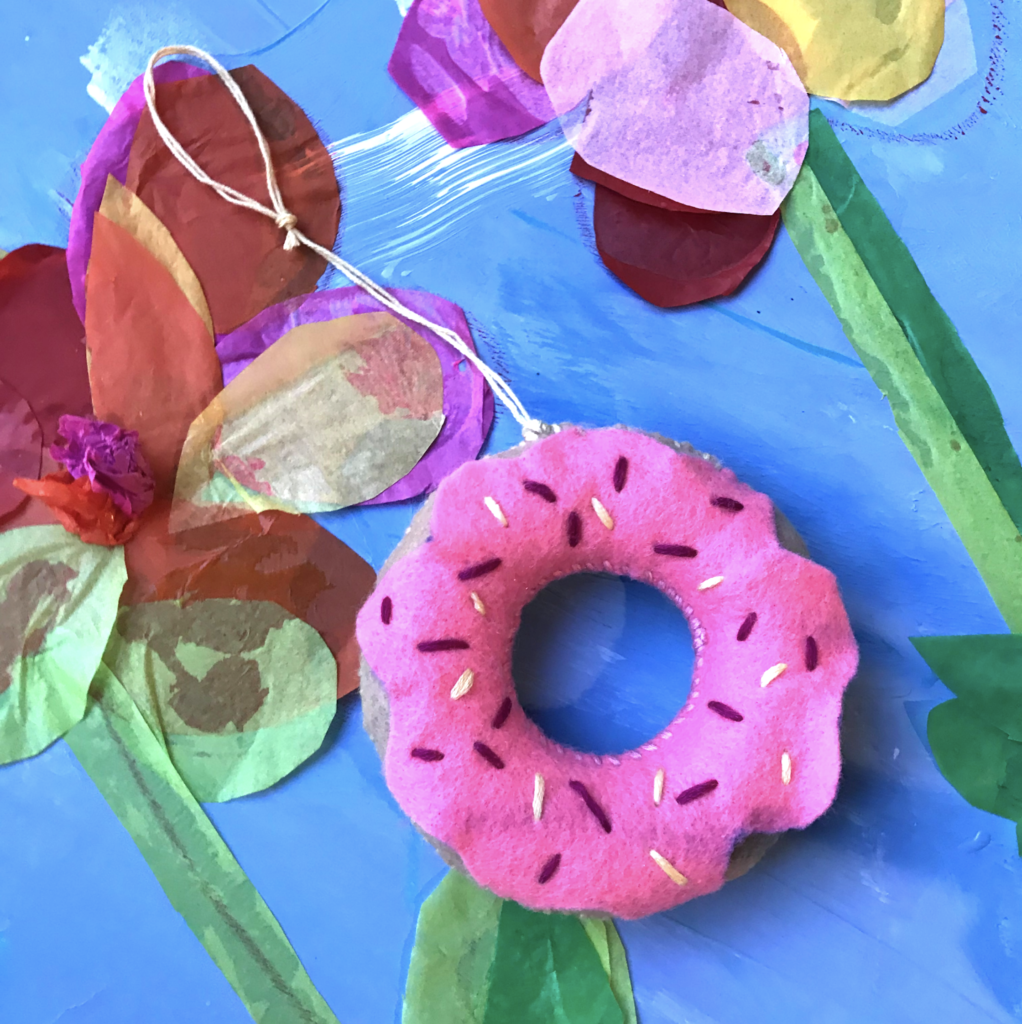 What colors did you use for your donuts? Share your final Donut DIY with us by tagging @mocanomi and using the hashtag #MOCAFunFridays