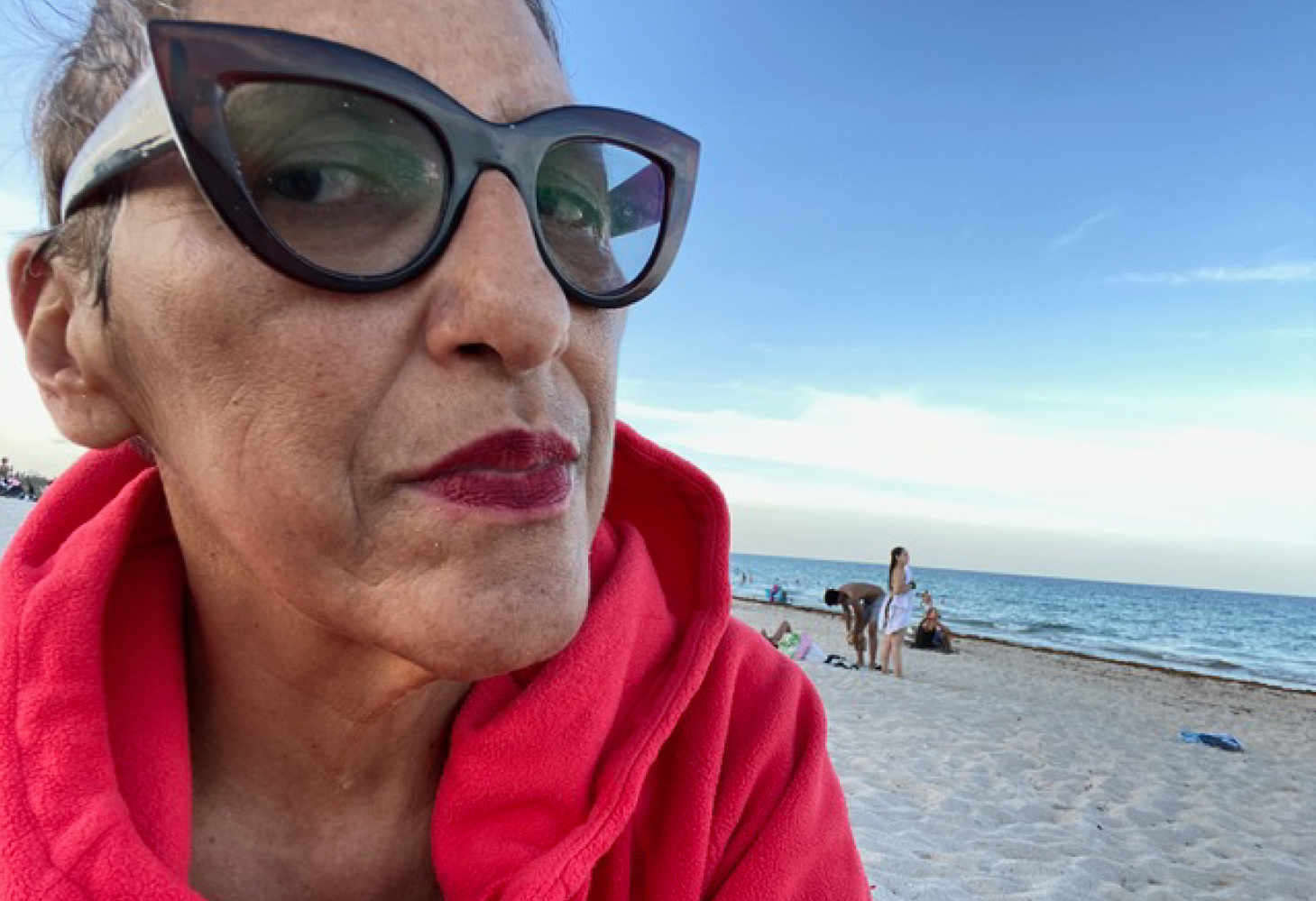 What is your name and title/occupation?
Charo Oquet, interdisciplinary artists and founding director of Edge Zones Art Center.

What are you reading/watching/listening to?
I am finishing “Seeing Power Art and Activism in the 21St Century”, by Nato Thompson, “Esto No Es Una Antologia: Palabras que Sangran by Colectivo Literario Al Arañazo (“This Is Not An Anthology: Words That Bleed by a Dominican Literary Collective The Scratch. I am re-watching: several documentaries such as: “I am not Your Negro” by Raoul Peck, and 13th. I am also viewing for the second time many interviews with Martin Luther King, Malcom X. After Little Richard, death, I started to search out all of his interviews and I was aware of who he was but really was unaware of how important he was in influencing people like the Beatles and the Stones. He was so ahead of his time that it is a real eye opener, how little credit he got for what later was owned by these other artists such as the Beatles. It is interest to watch today and you see how this man was treated by his interlocutors; how they mock him and what a strong, creative and intelligent person he was. It is amazing to watch how he dealt with all of this racism and mistreatment on TV, and kept going not letting put him down laughing it away. Also, I love to hear MLK and how well he expressed himself, what an amazing speaker and again dealt with racism when being interviewed by people who probably didn’t think of themselves as particularly racist or bias. There are lots of great documentaries online that one needs to view or to review right now during the BLM moment.

What are you working on right now (or how has your work changed over the last few months)?
I was paralyzed a bit at the beginning of the pandemic as my first reaction was to watch, listen and learn, it is very important to have a good understanding of what is going on around us to know what our next step should be. I listened and read a lot about the virus. I was connecting with friends internationally through social media who informed me about the crisis in their respective countries around the world. I cycled around the beach to see how people were reacting to the lockdown. The beginning of the pandemic was grant writing season, so I was busy with that and also thinking what to do next as far as programming for the organization. Trying to find money to prepare us for next year which I feel will be very difficult financially. I’ve had a few important personal projects cancelled or postponed. Some of projects were turned into Zoom gatherings like the one that has developed out of our postponed Dakar Biennial exhibition which is really great as the people are from different countries: the Dominican Republic and Dakar, Senegal and LA. I’ve been asked to participate in several other zoom gatherings such as the one organized by Miami’s FETA Foundation “Love Fest, a conference, performances, and a dance party”. I have been creating new ceramic pieces for an exhibition which was postponed but hopefully it will take place when things open up and I have been trying new ideas in clay creating new sculptures. However, being still sometimes can be a good thing, there is a paradigm shift in the world and it’s good to just be still, take it all in and let your mind and body digest it all. Time for contemplation is a very useful to help you grow and find new directions in your life, as well as making you question your values. The world will never be the same after this. We have lost some innocence or blindfolds have come off; no longer can we ignore certain things which are too apparent. We realize how connected we are to all humans in the planet regardless of where they are and what they look like. This country has not had a war in its own homeland since the Civil War. This is like a war in the sense that the entire country has been paralyzed and disrupted. Disruptions can be good, in a sense, because they can make you understand that things are not linear and predictable, and we always think we know what is going to happen next, but this, like any other catastrophe, makes us understand that life is full of uncertainties. We don’t control everything no matter how powerful we think we are. It teaches us that nature is stronger than man and that we belong to the earth, the earth does not belong to us. I have been through coups that toppled governments, revolutions, dictatorships, large earthquakes and hurricanes. I’ve learned that things can change drastically in seconds. This has fueled my understanding of life and its uncertainties. Artistically, I’ve been talking about Uncertainty since 2007 when I started my project “Art of Uncertainty” because I felt that a large shift in society was needed and coming. The pandemic has just accelerated it and highlighted things that have been there for too long.

What are you most looking forward to once we are no longer sequestered?
The first thing I was looking forward was to be able to swim in the beach, which I now do on a daily basis. It’s the reason I live in South Beach. The ocean is my healing center. Next, is to travel to the DR for “Index-Miami/Santo Domingo” a performance, noise and poetry festival we produce there with Miami artists who we bring to the D.R. I am looking forward to a project I have in Martinique which hopefully will be when things normalize and people can travel. There is also the Perez Foundation Caliban Voices project that I am working on with several Miami artists and my Knight Foundation Ecu-Yamba-O project that I am also working on at the moment but this is with lots of collaborations with other artists and student so it has to be postponed until things really open up.

Have you  taken up any new activities?
I have had to edit a few videos and doing some new ceramic pieces that are taking me into new directions. I also have been doing more exercises through YouTube since I can’t go to my regular classes. Nevertheless, I am pretty busy with administrative work, so I haven’t had time to go into a lot of new things. I am highly sociable so I need the interaction with others. It fuels me. I do enjoy being alone too, which you need to create but in times like this it is hard to be creative you are too much in survival mode. I sometimes go to bed thinking “I definitely have it!” “ It got me.” “ I’ll be dead soon!” “ I shouldn’t have gone out.” Because my throat is hurting or I am congested. I am very allergic to many things and it can make my chest get tight. So I go to bed thinking I got Covit. Then I wake up after taking some medication and realize I am ok. I am not dying!!! I am pretty sure I am not the only one feeling like this on a regular basis now.

Do you have a MOCA memory that you want to share?
I have had lots of great memories throughout the years, but I have to say the most impressive was the PÒTOPRENS: The Urban Artists of Port-au-Prince show curated by Leah Gordon and Edouard Duval Carrie in 2019. It was such an impressive show. I had met some of the artists in Haiti in 2002, and new of the works of others since the 90’s so it was great to see their progression and just the sheer amount of incredible works produce specially after the earthquake as well the videos which I really enjoyed. I also have fond memories of leading their children’s summer camps under Bonnie Clearwater which I started back in the 90’s. I did a lot of the youth and children’s workshops all over Miami in the 90’s. Back then I was the kid’s art workshop queen. My kids were little and I realized that children needed more art in their lives, especially in the summers. Therefore, I dedicated myself to working with youth and kids creating these art camps in the Art Center South Florida (now Oolite) while also creating jobs for myself and others during the summers when there were no jobs here for us.