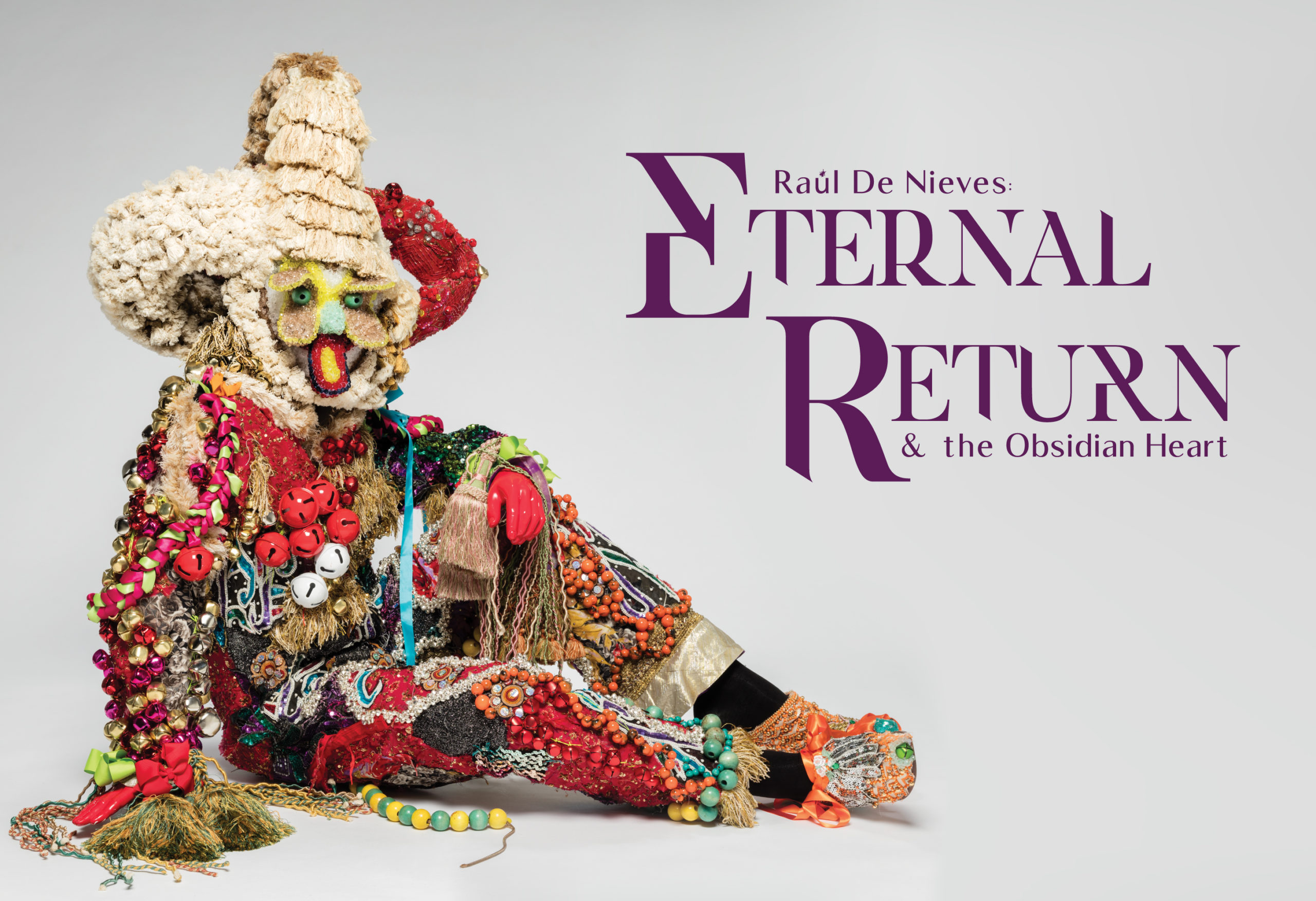 Eternal Return and The Obsidian Heart is, to date, the most comprehensive survey of work by Raúl de Nieves. The exhibition connects the artist’s exuberant material sensibility to his roots in punk music, devotional ritual, and celebratory queerness. The symbiosis between de Nieves’s sculptural work and musical collaborations, including his band Hairbone as well as his operatic performances, had yet to be considered until this exhibition.

De Nieves investigates divinity, desire, and decadence across material, emotional, and spiritual realms. The artist draws inspiration from his childhood spent in Michoacán, Mexico, where public religious ceremonies and private rituals incorporate elaborate costuming and theatrical components. Coming of age in DIY scenes in San Diego and San Francisco also energized de Nieves with a theatrical approach to art making. After arriving in New York in 2007, the artist began working collaboratively on musical projects that transgress genre boundaries into artistic performances. Collaborating with a largely queer milieu of artists, dancers, and musicians, he fronts the noise band Hairbone and has orchestrated a number of operas. Examples of both types of performances play throughout the exhibition to illuminate the symbiosis between de Nieves’s solo sculptural work and his musical collaborations.

In New York, de Nieves also began to articulate his aesthetic of abundance through an economy of means by producing labor-intensive paintings, sculptures, drawings, installations, and environments. The artist transmutes emotional and psychic energy into physical form through a ritual-like process. To create his elaborate anthropomorphic figures, the artist channels emotions through his body into readymade, material containers that include craft store beads, crystals, plastic jewels, sequins, cardboard, transparent acetate, and tape. From afar, these materials shimmer and seduce, but reveal themselves to be mass-produced and readily available upon a closer look. This meticulous process is the means by which de Nieves imbues his opulent creations with a spiritual essence and power. Such otherworldly power is felt throughout the exhibition and embodied in the artist’s signature “stained glass” installations and multi-genre performances that channel alternate dimensions.

To step into this exhibition is to enter into an awareness of the multiplicity of time. The artist and curator worked closely together to design the exhibition as an immersive Gesamtkunstwerk (total artwork) in which individual sculptures, installations, and audio from performances blend together into a cohesive experience of the spiritual, familial, and self across time. In the “stained glass” installation, Basilio, cosmic time is represented in colorful configurations of planets moving around the sun, which is itself depicted as it appears from Earth at various moments of transit across the sky over the course of a year. The time of a year—measured by the cycle of the four seasons—is also represented in the series of paintings, Fall, Winter, Spring, and Summer. This cycle of birth, death, and rebirth repeats throughout the exhibition. Human time—measured in the progression from infancy through adolescence, to adulthood, and into old age—manifests in the myriad gem-encrusted babies who dance between installations. Death and rebirth appear as one concept in the deconstructed sculptural installation Celebration. At the center of the exhibition, a life-size carousel circles endlessly in a performance of fantasy and delirium, referencing the cyclical time of Eternal Return: the idea that time is composed of a limited number of events that endlessly recur in different sequences and combinations.

The time of Eternal Return is populated by archetypes like the Fool, the first card in the tarot, and Saint George, the dragon slayer from medieval lore. Both characters reoccur in de Nieves’s work as they symbolize key moments in life’s unfolding journey. Ancestral time is accessed through objects like obsidian, a central metaphor in the exhibition. The volcanic stone was used by the Olmec and Mexica people of ancient Mexico to make mirrors that also functioned as spiritual portals. Dark and shining—much like the black glass used in the installation Fina—one must look through obsidian’s reflectivity to shift the mirror reflection into a portal for communicating with ancestors.

For de Nieves, art making is a related process of creating a mirror for one’s self; a tool for reflection and a means of externalizing an interior state in order to see possibilities for growth. Eternal Return and The Obsidian Heart offers a holistic look at the ways in which the artist rejoins the spiritual with the material within a contemporary culture that is as familiar as it is magical.

Raul de Nieves: Eternal Return and the Obsidian Heart is made possible with the continued support of the North Miami Mayor and Council and the City of North Miami, the State of Florida, Department of State, Division of Cultural Affairs and the Florida Council on Arts and Culture, the Miami-Dade County Department of Cultural Affairs and the Cultural Affairs Council, the Miami-Dade County Mayor and Board of County Commissioners, and with support from the Green Family Foundation. Additional support from Company Gallery, Michael Ringier and Fitzpatrick Gallery is gratefully acknowledged.

RAÚL DE NIEVES is a multimedia artist, performer, and musician, whose wide-ranging practice investigates notions of beauty and transformation. De Nieves’ visual symbolism draws on both classical Catholic and Mexican vernacular motifs to create his own unique mythology, which often challenges and explores themes of sexuality, the human body, and individual and public histories. Recent solo exhibitions include those at the Cleveland Museum of Art, Cleveland; Company, New York; Apalazzo, Brescia and Freedman Fitzpatrick, Los Angeles. Additional group shows include those at K11 Art Foundation, Hong Kong; Swiss Institute, New York; New Orleans Museum of Art, New Orleans; The Museum of Art and Design, New York; the Zabludowicz Collection, London as well the 2017 Whitney Biennial and MoMA PS1’s 2015 Greater New York. De Nieves has performed at Documenta 14, Performa 13, MoMA PS1, ICA Philadelphia, The Watermill Center, The Kitchen, Artist’s Space and numerous other venues. Forthcoming solo exhibitions include those at Company, New York; and ICA, Boston. His work is included in public collections at the Whitney Museum of American Art and the Museum of Contemporary Art, Los Angeles. De Nieves was born in 1983 in Michoacan, Mexico and currently lives and works in Brooklyn, NY.

RISA PULEO is an independent curator and critic. Her exhibition Monarchs: Brown and Native Contemporary Artists in the Path of the Butterfly, was curated for Bemis Center for Contemporary Art during her year as curator-in-residence. The exhibition traveled to the Museum of Contemporary Art, North Miami; Blue Star Contemporary and Southwest School of Art in San Antonio; and The Nerman Art Museum in Overland Park, Kansas. Puleo’s exhibition Walls Turned Sideways: Artists Confront the Justice System opened at the Contemporary Arts Museum in Houston in 2018 and traveled to Tufts University Art Gallery in 2020. Other exhibitions have been hosted by the Leslie Lohman Museum in New York City; Franklin Street Works in Stamford, CT; Charlotte Street Foundation in Kansas City, and more. She was a guest curator of Artpace San Antonio’s International Artist-in-Residence Spring 2018 cycle: Rafa Esparza, Kapwani Kiwanga, and Carlos Rosales-Silva. Puleo has master’s degrees from the Center for Curatorial Studies at Bard College and Hunter College and is a doctoral candidate in Northwestern University’s art history program. She has written for Art in America, Art Papers, Art 21, Asia Art Pacific, Hyperallergic.com, Modern Painters and other art publications.

About the works in the exhibition: