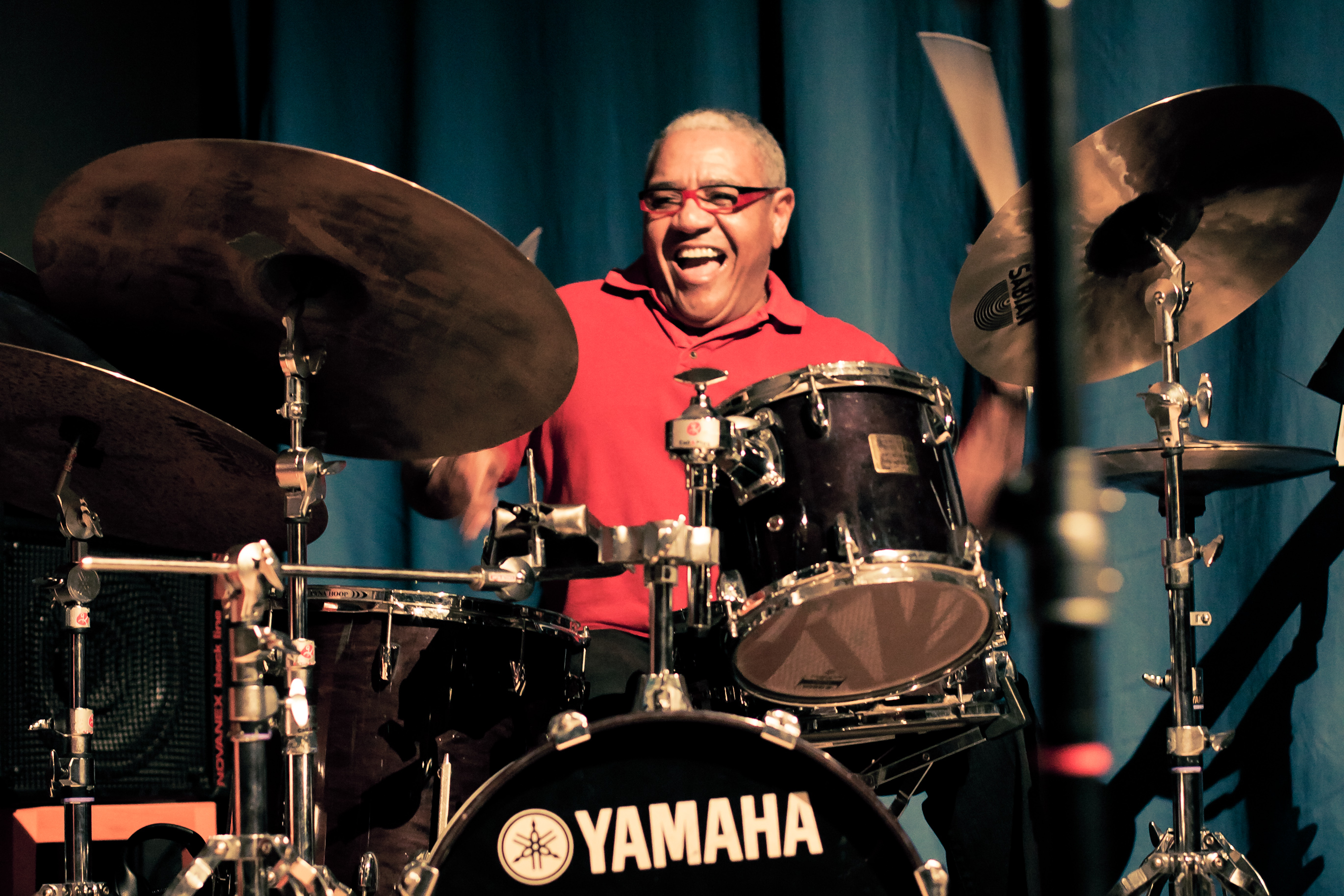 Ignacio Berroa has been recognized as one of the greatest drummers of our times. He was included in the 2011 Mp3 compilation entitled “Jazz Drumming Legends” which features some of the most renowned drummers in Jazz history.

At once a veteran and a pioneer, the Cuban-born drummer has been applauded through the years for his facility in combining folkloric rhythms with contemporary jazz and funk. It is a fiery blend that swings like a mother, grooves like a locomotive, never forgetting old country roots.

For a taste, Google “Se Le Ve”, a hit track Berroa cut with the Puerto Rican band Batacumbele decades back. That’s Berroa in the studio aside a youthful, not-yet-famous Giovanni Hidalgo, grooving hard. Others have assumed credit for this songo rhythm but we feel Ignacio’s version is the benchmark. Listen to the way he hangs with the ancient 2/3 clavé while injecting urban accents. Note his left hand, always active, expertly inserting “inside” buzzes and snappy accents. That’s some high- level drumming! Ignacio Berroa owns that stuff but he didn’t hang waiting for acclaim.

Next stop was the USA, where he became first call for everybody who mattered in contemporary jazz. A short list includes Dizzy Gillespie, McCoy Tyner, Jackie McLean, Jack Bruce, Winton Marsalis, Jaco Pastorius…on and on. And his pride and joy, The Ignacio Berroa Quartet positively sizzles. You want to talk groove? He digs a trench! And it’s not just bare-bones time playing. It is flare and flash, too. Ignacio possesses the uncanny ability to dazzle with his fills, while he can toss off a single measure in 4/4 time that will lift a crowd to its feet. Ignacio crackles with the sort of electricity that gets people excited about playing drums in the first place. Incidentally, he stands proud on the recent album Jazz Drumming Legends, a Blue Note/Modern Drummer compilation.

His first album as a leader, “Codes”, released under Blue Note Records, was nominated for a Grammy in 2007. “Codes” also won a Danish Music Award in 2007 as best International Jazz Album. He was honored by inclusion in the 2011 Modern Drummer Magazine and Blue Note Records Mp3 entitled “Jazz Drumming Legends”. Ignacio received a Lifetime Achievement Award from The Montreal Jazz Festival in 2011. His second album as a leader “Heritage & Passion” was released in 2014 under 5Passion.

Ignacio is one of the greatest drummers of our time. It is a shame that a lot of American drummers don’t know him. American drummers like to go after names, but sometimes the people you don’t know are the ones you should know. What better teacher can you go to for Jazz and Afro- Cuban rhythms than Ignacio…” Dennis Chambers

“Ignacio Berroa is an all-American 100% Afro-Cuban drumming maestro, completely fluent and conversant in all styles of music. He is a gift to our music.” Peter Erskine

“Ignacio plays with intelligence, taste, fire, and soul. His playing combines the finest aspects of Afro-Cuban and American styles of drumming (…) When you hear him play it just makes you feel good, just like a good hot bowl of gumbo!”
Wynton Marsalis