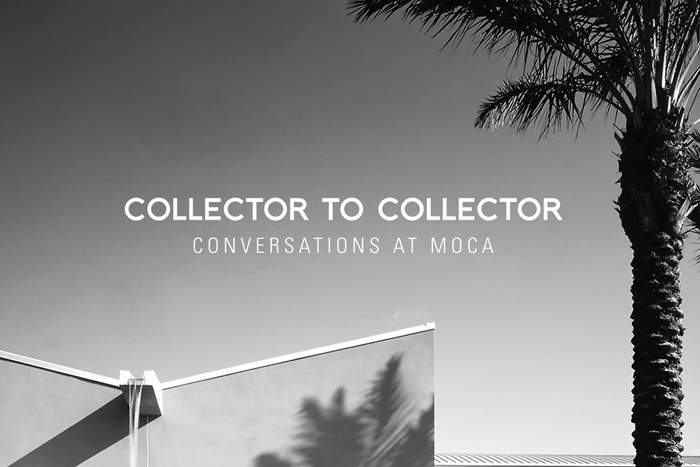 Collector to Collector: Conversations at MOCA

Leading art collectors who have played a key role in the history of contemporary art in Miami will share their experiences and insight into building a personal collection in a series of conversations with MOCA Executive Director and Chief Curator Bonnie Clearwater.  Topics addressed will be the motives, passions and rewards of collecting as well as the various steps it takes to become a collector.

This program is in conjunction with the exhibition  Pivot Points: 15 Years and Counting: MOCA’s 15th Anniversary Collection featuring works donated to the museum in honor of its 15th Anniversary.  Curated by Bonnie Clearwater,  Pivot Points is sponsored by Howard Kaye Insurance Agency, with support from Funding Arts Network and MOCA Visionary Members Lorena and Eveliro Gomez.

Rosalind Jacobs’ lifelong friendships with many of the iconic artists of the Surrealist and Dadaist movements resulted in an amazing collection of works by Rene Magritte, Marcel Duchamp, Max Ernst, and most substantially,  Man Ray.   By collecting these artists’ work in the 1950s and  early 1960s when they were being overshadowed by Abstract Expressionists, Ms. Jacobs and her husband Melvin, contributed to their support at a critical point in their careers.  Ms. Jacob, who is a current MOCA Board member, has donated several works from her collection to MOCA including the promised gift of a Joseph Cornell box assemblage on view in MOCA’s Pivot Points exhibition. In 2000, the museum presented the exhibition Sweet Dreams and Nightmares: Dada and Surrealism from the Rosalind and Melvin Jacobs Collection.

Andrew J.  Hall and his wife Christine and the Hall Art Foundation have recently opened a public museum in Vermont, which showcases a portion of their extensive collection.   Consistently named among the top collectors in the world by ARTnews, their collection includes works by Anselm Kiefer,  Joseph Beuys,  Eric Fischl, Julian Schnabel, Andy Warhol and Georg Baselitz, whose German castle they purchased and are transforming into a public museum.  The Hall Art Foundation will also open a public art space at MASS MoCA, which opens this summer. The Halls have generously loaned works to MOCA’s Malcolm Morley and Enoc Perez exhibitions, and have hosted MOCA’s fundraising dinners Enchanted Evenings in their homes in Palm Beach and Connecticut.

BREAK /  Lunch will be available for purchase in the MOCA Shop.

The collection of  Irma and Norman Braman,  known as one of the most important in the world, includes works by modern masters  Pablo Picasso, Andy Warhol,  Mark Rothko, Roy Lichtenstein,  Jasper Johns, Frank Stella,  Damien Hirst, Jean-Michel Basquiat, Gerhard Richter and Alexander Calder as well as outdoor sculpture by Richard Serra, Joan Miro, Willem de Kooning and David Smith.  Among their contributions to MOCA’s collection includes a large-scaled installation by Ed and Nancy Keinholz.  Irma Braman served as MOCA Board Chair for 12 years during which time, MOCA flourished into the leading international arts organization it is today.

Martin Z. Margulies is a major donor to MOCA’s collection, including a large-scale installation by Swiss artist Thomas Hirschhorn and recently donated photographs by Ed Ruscha to MOCA’s 15th Anniversary Collection, on view in the Pivot Points exhibition. Margulies makes his vast holdings of photography, large-scale sculpture and installations available to the public through his warehouse in Wynwood.  Named in the top 100 collectors in the world by ARTnews, he also has seminal works by European modern masters such as Willem de Kooning, Abstract Expressionists including Mark Rothko, Pop artists such as Roy Lichtenstein and major sculptures by Donald Judd, David Smith and Isamu Noguchi.

Boris Hirmas, Chairman of the Board of Sala de Arte Publico Siquieros/La Tallera and a member of Tate’s Latin American Acquisitions Committee, divides his 200-strong art collection between the offices of  his family’s financial services in Mexico City and his home in Miami, where Hirmas serves as  Entrepreneur-in-Residence at Florida International University’s (FIU) College of Business.  His collection includes works by Carlos Amorales, Teresa Margolles, Etienne Chambaud and Herman Nitsch among others.

BREAK /  Lunch will be available for purchase in the MOCA Shop.

Estelle and Paul Berg have been collecting the work of emerging artists for over 50 years. Their shared passion for discovering rising talent has greatly enriched their lives and provided inspiration for young collectors.   Paul Berg was a longtime MOCA Board member and the couple are particularly supportive of Miami artists. They have given generously to MOCA over the years, including works by Magdelena Abakanowicz, Dennis Oppenheim, James Turrell, Sara Seeger, Ulla von Brandenburg and Andres Serrano. Their most recent donation, a copper sculpture by Roni Horn, is on view in the Pivot Points exhibition.

Ella Cisneros is president of the Cisneros Fontanals Art Foundation (CIFO), which supports artists exploring new directions in contemporary art and fosters cultural understanding and educational exchange.  She is consistently listed among the top collectors in the world by ARTnews and her collection includes leading international artists Richard Tuttle, Anish Kapoor, Damien Hirst, Francesca Woodman, Lygia Clark, Lucio Fontana, Gego and Mira Schendel, among others. She is a longtime supporter of MOCA and has recently joined the museum’s Board of Trustees. The Ella Fontanals-Cisneros Collection is currently in the care of CIFO, the non-profit foundation she established in 2002 along with her family. She also serves on the board of trustees of the American Patrons of the Tate.