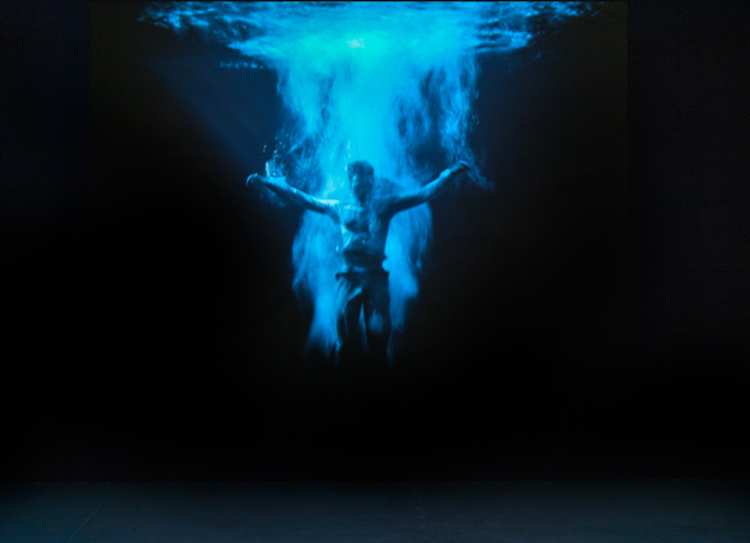 The Museum of Contemporary Art (MOCA) North Miami presents a major exhibition of work by Bill Viola, recognized as one of the pioneers and leading practitioners of video art. Bill Viola: Liber Insularum will be on view through March 3, 2013. The exhibition is presented as part of MOCA’s Knight Exhibition Series. It was first shown last year at Sala de Arte Contemporaneo del Gobierno de Canarias (Spain). The exhibition is organized in collaboration with Bill Viola Studio and is curated by Roc Laseca.

An iconic contemporary artist who draws from Eastern and Western spiritual traditions, Bill Viola is known for creating immersive video installations that explore such universally human subjects as birth, death, and the nature of consciousness. His exhibition at MOCA North Miami is inspired by The Book of the Islands of the Archipelago, authored by the Florentine ecclesiastic Cristoforo Buondelmonti in the 15th century. The works featured in Liber Insularum (The Book of Islands) use this historic text as a reference point to engage with distinctly modern themes of spiritual isolation in a 21st-century global landscape. Many of the works in the exhibition were produced after Viola’s last retrospective in 1997 at the Whitney Museum of American Art.

Works included in the exhibition:

Three Women, 2008
Color High-Definition video on plasma display mounted on wall
Three ghostly female figures of various ages approach the camera in slow motion, passing through a wall of water that transforms their appearance from evanescence to corporeality.

The Raft, 2004
Large video projection on wall in 16:29 High-Definition with 5.1 surround sound
Extreme slow motion reveals the subtle nuances of light and color in a group of 19 individuals as they are struck by an onslaught of water from a high-pressure hose.

Observance, 2002
Color High-Definition video on plasma display mounted on wall
A steady stream of people move through the frame, their faces overcome with emotion as their gaze fixes on an object in the distance.

The Quintet of the Astonished, 2000
Color video rear projection on screen mounted on wall in dark room
A group of people undergoes intense waves of emotion, the subtleties of their expressions captured and enhanced by slow-motion photography to create a subjective dreamlike space.

The Reflecting Pool, 1977-79
Color, mono sound
Time freezes as a man leaps into a pool of water, with a world of movement and change emerging in the reflections beneath him.

“Bill Viola’s work has long displayed a concern with the artistic possibilities of emotion, connecting viscerally with the viewer,” comments Bonnie Clearwater, MOCA North Miami’s Executive Director and Chief Curator. “Many artists MOCA North Miami has recently worked with — Ragnar Kjartansson, Rita Ackermann, Mark Handforth and Tracey Emin — are similarly demonstrating a strong desire for emotionally-driven art that is expressed without irony or cynicism. These connections, along with MOCA North Miami’s commitment to encouraging artistic experimentation and risk-taking, made presenting Bill Viola’s work a natural fit for us.”

Bill Viola
Bill Viola was born in Queens, New York in 1951. He received a BFA in Experimental Studies from Syracuse University and later worked at the Everson Museum of Art in Syracuse, one of the first American museums to establish a video art department. As the technical director of production at art/tapes/22, the influential video art studio in Florence, Italy, Viola led an emerging generation of 1970s video artists that includes Nam June Paik, Bruce Nauman, and others. He currently lives and works in Long Beach, California, with his wife and collaborator Kira Perov.

Bill Viola is the recipient of numerous awards and honors including a John D. and Catherine T. MacArthur Foundation Fellowship in 1989.  His work has been displayed in solo exhibitions at museums around the world including: the Museum of Modern Art, New York; the Museum of Contemporary Art, Los Angeles; Moderna Museet, Stockholm; Musée des Beaux-Arts, Nantes; the Guggenheim Museum, New York; Museum für Moderne Kunst, Frankfurt; Stedelijk Museum, Amsterdam; Mori Art Museum, Tokyo, The Art Institute of Chicago; the Whitney Museum of American Art, New York, and many others.

Roc Laseca
Roc Laseca holds a PhD in Art Theory and Cultural Perspective and trained as a musicologist and on the semiotics of art at the Universidad Complutense de Madrid and Helsinki University.  In 2002 he became a consultant in artistic and cultural cooperation between Spain and the U.S.  Since 2006, Laseca has occupied a research position at the University of La Laguna in the Canary Islands and is the author of curatorial programs for museums and art institutions in Europe, the United States and Latin America.