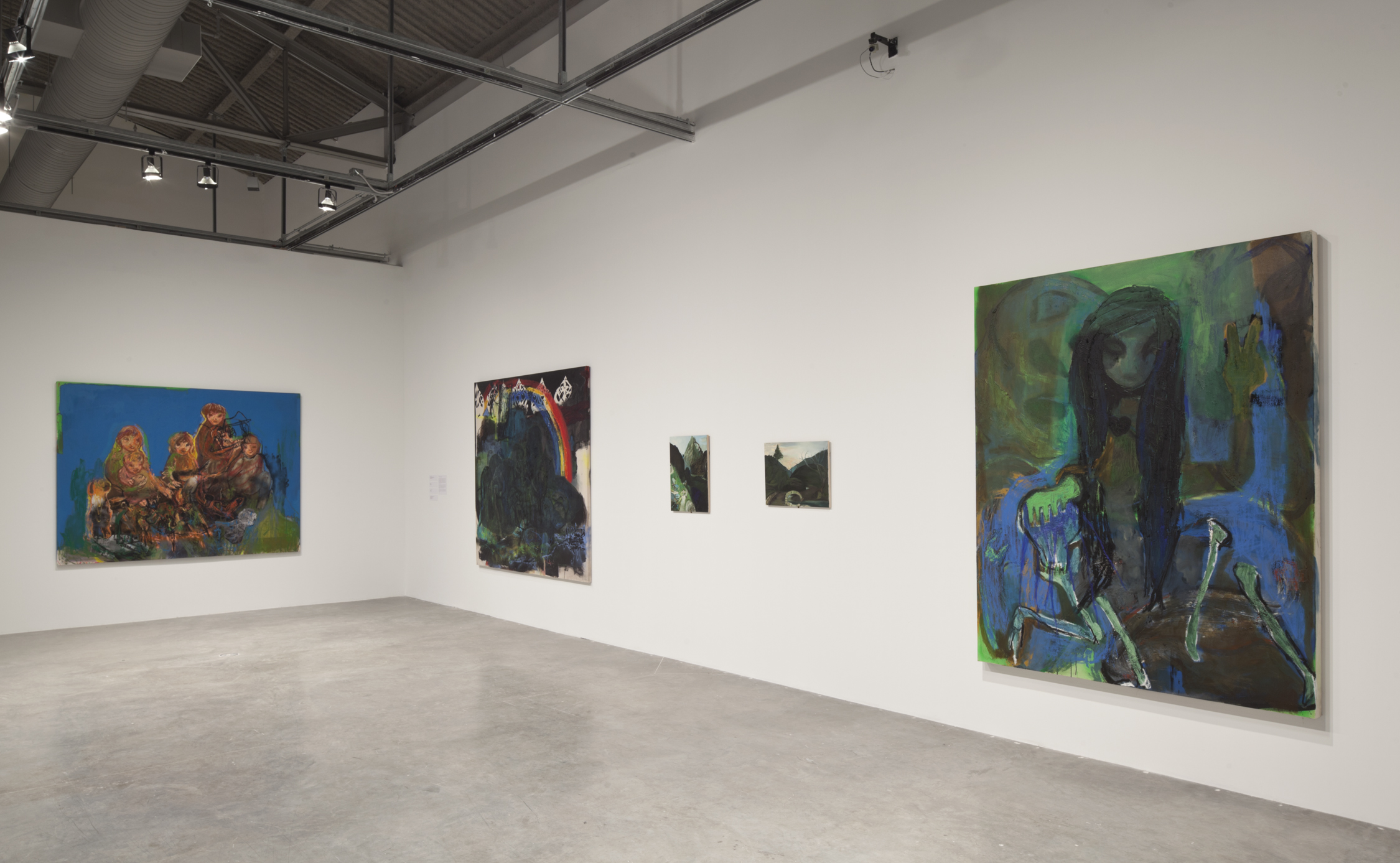 March 15 – May 6, 2012
This survey exhibition of the Hungarian-born, New York-based artist examines Ackermann’s work throughout her career and the changes that occurred through her immersion into Western culture.  Among the exhibition’s 48 works are several never-before-seen paintings, drawings, collages from 1993 to the present.

After studying at the University of Fine Arts in Budapest, Ackermann moved to New York City in the early 1990s, where she garnered acclaim for her drawings depicting the liberation of the female form. Inspired by literature, film, and philosophy, Ackermann has drawn extensively on her perspective as a European artist immersed in American cultural vernacular to create a diverse body of work that ranges from expressionism to abstraction. Her work frequently depicts American archetypes including nymphets, outlaws and matrons.

Early figurative paintings like Get A Job (1993) highlight Ackermann’s connection to Hungarian modernism, with its characteristic psychology, surrealism, and automatism. These works brought her immediate acclaim.  Ackermann’s work is marked by abrupt changes in style and subject.  Her next paintings were based on snapshots of her little brother, suggesting poses of male bravado. Because she was working from a photograph, she did not have to think about a subject; she could focus on the act of painting and her work became more abstract.  Her work took a new direction with The Ugly Painting (1996-1997) and a series of ballpoint pen drawings of layered and juxtaposed images referencing war, which resemble collages. In her 1996 Untitled (King Ubu Series) collaged clippings of the human form, hands, torsos and muscular biceps, are juxtaposed against colorful, animate backgrounds and aggressive terms such as ‘fear’, ‘anger’ and ‘fire.’

From 2006-2008, Ackermann worked exclusively in collage resulting in a series of works sandwiched between Plexiglas. These totemic personages, such as Firecrotch, 2008, cross the boundary between two and three-dimensional objects. An artist’s residency at the Chinati Art Foundation in Marfa, Texas allowed Ackermann the time and opportunity to explore the abstract elements of her painting.  Working in the former studio of Minimalist sculptor Donald Judd, Ackermann used the theme of the car crash to push her paintings toward gestural abstract expressionism in her ‘Marfa Crash’ series.   Ackermann equates the changes that occur in her work to shipwrecks, car crashes and other catastrophic events that demand response.  As she observes, “After these catastrophes, you find purity and a moment of silence that is the highest harmony and peace.”

The exhibition also includes a recent collaboration with filmmaker Harmony Korine and her most  abstract paintings to date,  called The “Backwards Paintings,” so called for the backwards process she used to paint them. Ackermann made these paintings by dripping paint on unstretched canvas on the floor. She scratched lines into the paint to suggest vague figurative gestures. The foreground of these paintings melts into the background, creating the sensation of a birds-eye view of oceans glimpsed through clouds. The final gesture is applied with rabbit skin glue and powdered pigment, typically used to prepare a canvas prior to painting. The resulting abstraction looks as though it is in a beginning state rather than a finished composition.

Rita Ackermann is organized by the Museum of Contemporary Art, North Miami and is curated by MOCA Executive Director and Chief Curator Bonnie Clearwater.

Rita Ackermann
Rita Ackermann was born in Budapest, Hungary in 1968. She studied at the University of Fine Arts in Budapest, and moved to New York City to continue her studies at the New York Studio School of Drawing, Painting, and Sculpture. After establishing herself in the New York art scene during the 1990s, Ackermann moved to Texas in 1999, returning to New York two years later. Rita Ackermann has exhibited extensively at museums and galleries around the world. Solo exhibitions include After Dinner I’m Gonna Shoot You But Before I’ll Take a Shower, Andrea Rosen Gallery, New York, NY (1994); It Doesn’t Matter if You Love Me or Not…I’ll Be Always There For You…, Rebecca Camhi Gallery, Athens, Greece (1995); out of the blue into the black, Interim Art, London, England (1995); The Birth of a Tragedy, Peter Kilchmann Galerie, Zurich, Switzerland (1995); If Anyone Hurts My Brother, I’ll Kill That…, Andrea Rosen Gallery, New York, NY (1996); Revelation, Parco Gallery, Tokyo, Japan (1999); God’s Little Helpers, Galerie Krobath Wimmer, Vienna, Austria (2000); the only way to get to my vagina is through Jesus!, Peter Kilchmann Galerie, Zurich, Switzerland (2001); Style Show for the Levitation of the Strong American Women, The Deep Gallery, Paris, France (2001); Snowfall in August, Museum Het Domein, Sittard, Holland (2002); Listen to the Fool’s Reproach, Andrea Rosen Gallery, New York, NY (2004); Cort Toujours, Peter Kilchmann Galerie, Zurich, Switzerland (2006); CRASH/STOP, Rebecca Camhi Gallery, Athens, Greece (2010); and WARFILMS, The Journal Gallery, Brooklyn, NY (2011).
Hotel accommodations provided by Casa Moderna.