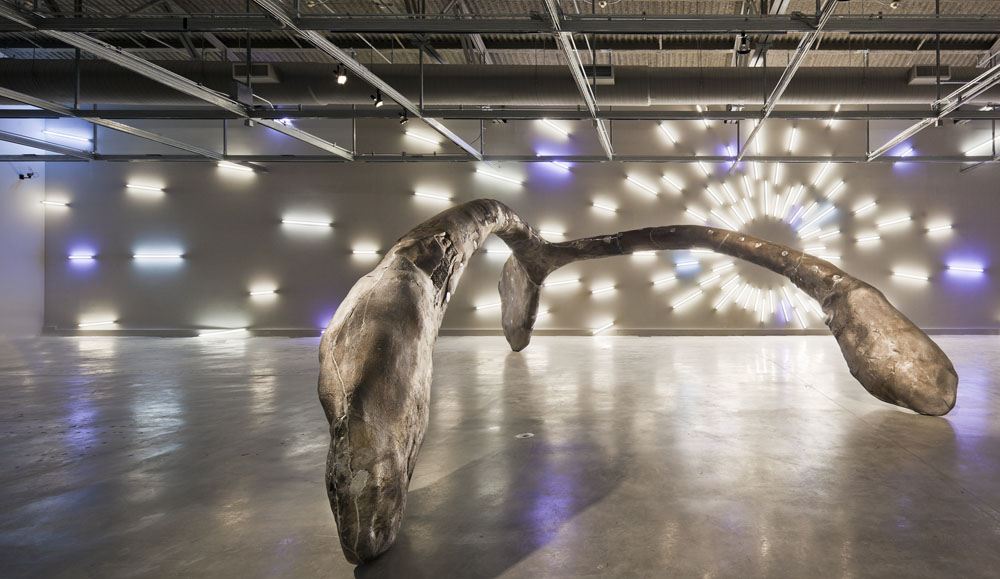 Inspired by everyday urban existence, Mark Handforth’s sculptures are poetic, lyrical, and wryly comical objects that comment on daily life and human interaction. Through a corporeal engagement with scale and distortion of form, Handforth imbues works such as an illuminated street lamp resting on the ground, a weeping neon moon, and a monumental coat hanger with distinctive personalities.
Mark Handforth: Rolling Stop brings together 25 works from 1998 to the present including a major new light installation of a solar eclipse, which draws as much from the early 19th-century English Romantic artist William Blake as it does from Miami’s ubiquitous neon signage. The exhibition extends beyond the museum’s galleries with works installed on the MOCA Plaza and in the museum’s courtyard where Herbal Hill, a sculpture Handforth created for a group show at MOCA in 1998 will be reinstalled. Other locations offsite include the installation of Electric Tree, a giant banyan tree delineated, illuminated and honored with lines of light tracing its limbs in the City of North Miami’s Griffing Park, and the pink neon Weeping Moon, 2010 that glows and weeps on a billboard in the Wynwood Arts District of Miami. The exhibition is curated by MOCA Executive Director and Chief Curator Bonnie Clearwater and is part of MOCA’s Knight Exhibition Series.

A catalogue with essays by Bonnie Clearwater, and Tom Eccles, executive director of Bard College’s Center for Curatorial Studies accompanies the exhibition.