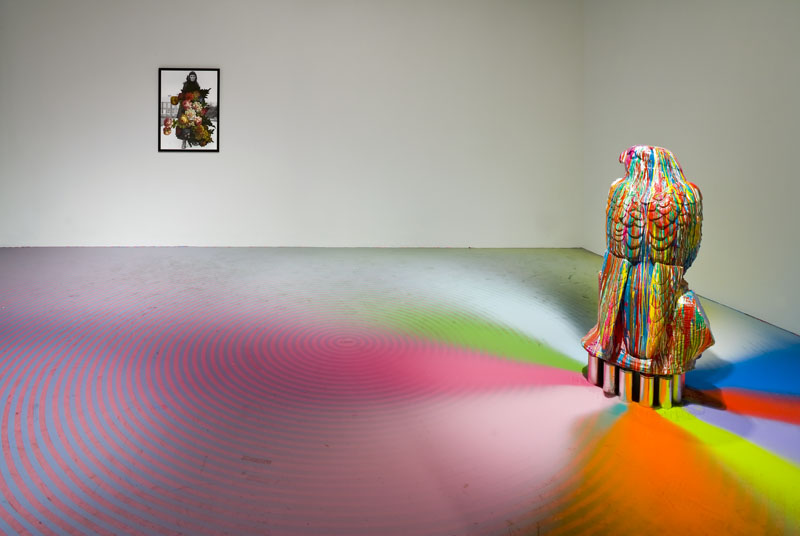 Sympathy for the Devil: Art and Rock & Roll Since 1967

Sympathy for the Devil : Art and Rock and Roll Since 1967, is the first major exhibition to explore the relationship between contemporary art and rock music over the past forty years. The exhibition, whose title is culled from the Rolling Stones song that invites the listener to “have some sympathy and some taste” charts the intersection of the two cultural genres through art, album cover design, music videos, film and other materials, and examines the convergence of traditionally serious visual art and rebellious and irreverent rock music

Beginning with Andy Warhol’s legendary involvement with Velvet Underground in 1967 and culminating in a major new installation by British artist Jim Lambie, whose background as a rock musician and DJ heavily informs his sculpture, Sympathy for the Devil provides a serious and comprehensive presentation of art work arising form the intersection of these two worlds.

Organized by the Museum of Contemporary Art, Chicago and curated by MCA, Chicago Curator Dominic Molon, Sympathy for the Devil: Art and Rock and Roll Since 1967 includes over 100 works of art by 56 artists and artist collectives, explores the varied ways art and music interrelated and overlapped (or in some cases not) in six geographic centers: New York, West Coast/Los Angeles, Midwest, United Kingdom, Europe, and “The World.” The emphasis is not on the aesthetics of rock, but on singular and significant works of art in various formats and media, that were created as a circumstance of the two cultural genres coming together.

The presentation of Sympathy for the Devil at MOCA, North Miami is made possible by Toni and Daniel Holtz, the Braman Family Foundation and Ocean Drive magazine.