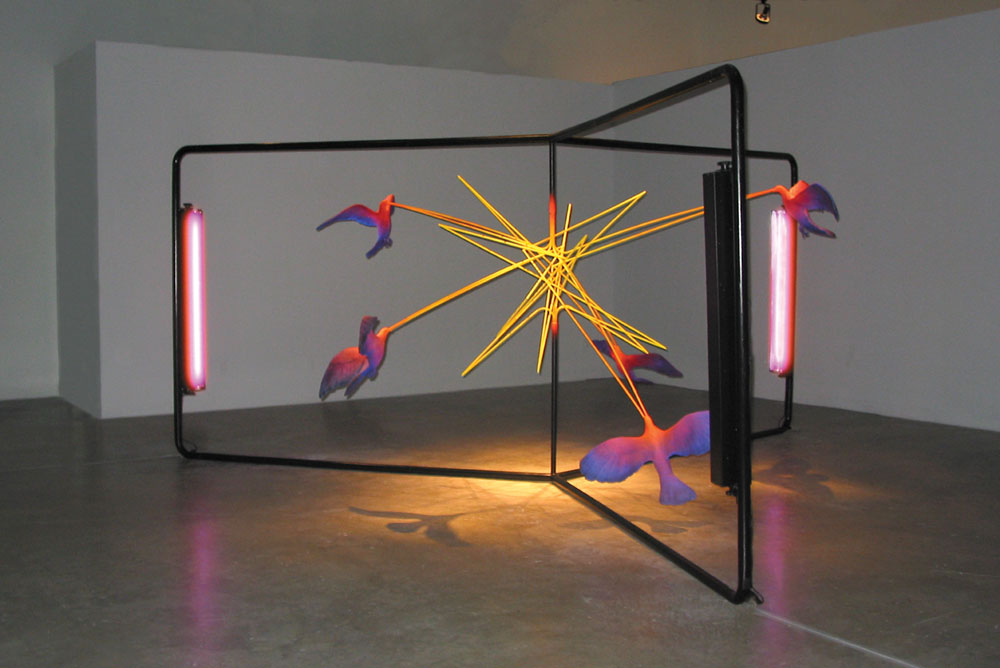 John Espinosa’s sculptural dioramas pinpoint moments of epiphany and transformation. The recurring narratives of animals and beings in solitary moments of revelation, or in groups locked in a collective trance reference his experiences as a once devout Jehovah’s Witness raised amidst the fantastic landscapes of Central Florida near Disney World. The Museum of Contemporary Art presents Espinosa’s first solo museum exhibition, Standing Still While We Move Across Land.

Espinosa melds mechanical devices with natural forms, creating geometric structures that map the exchange of energy during physical and psychological transformation. These complex structures balance precariously, mysteriously maintaining equilibrium. For Espinosa, this equilibrium functions both as a structural fact and a metaphor for a teetering state of mind, dangling between revelation and delusion. The centerpiece of the exhibition is a sculpture titled Standing Still While We Move Across Land, 2004, a multi-media work depicting a flock of birds interlocked by thin rods that converge in a jagged, linear tangle. The hovering structure is illuminated by ultraviolet lights. Mimicking the color patterns found in infrared photography, its surface is airbrushed with phosphorescent pigments that diagram the flow of body heat. . In Espinosa’s sculpture A Billion Years, 2004, black steel conduits capture and harness the thermal energy of an eternally mesmerized rabbit that appears to have petrified and turned to stone.
The mandala-like collage on paper, People With Eyes, 2004, confronts the viewer with a sea of faces in spiritual ecstasy, hypnotically staring out through hypnotic yellow eyes symbolizing a state of collective rapture.
Standing Still While We Move Across Land is made possible by Millennium Partners – Four Seasons Hotel and Towers.