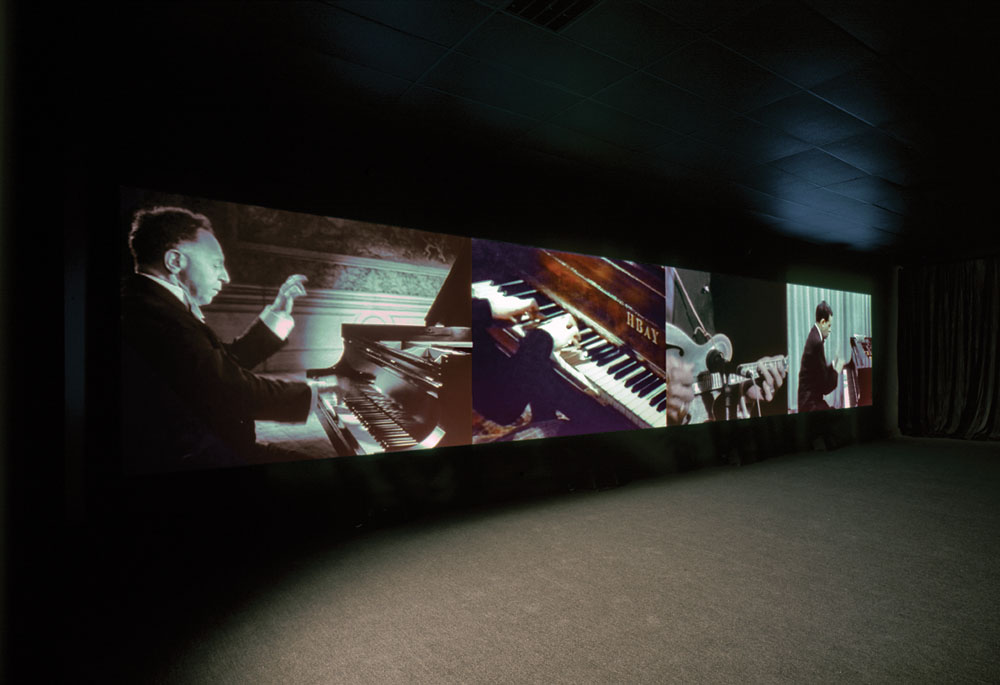 An innovative exhibition of large-scale video projection by nine contemporary artists whose manipulation of movies, film and television, creates new realities for the viewer explores how contemporary artists use excerpts from pre-existing films in order to create new narratives, different emotional content and new musical scores.The exhibition’s artists manipulate the most familiar of media, restructuring reality to make the familiar unfamiliar and provide the viewer the opportunity to comprehend a new reality. The emphasis is not on the use of found footage itself, but on its manipulation to create new work.“By choosing to use pre-existing film, these artists supplant the typical authorial role of the Director with that of the Editor. They don’t need to shoot the film for they understand that the editing and shaping of what may already exist in the world is a more powerful and revealing act,” explains Stefano Basilico, the exhibition’s curator.

The exhibition’s 14 works, each housed in an independent theatre or viewing room, explore a wide range of variations and methodologies as they underscore the actions through which artists create video. Clearly indebted to appropriation strategies from the art of the 1980s and sampling in hip hop and rap music of the 1990s, these artists are united by what may be called their “gestural” use of editing. The artists in CUT have taken the material of their reality, the movie and the news program, and manipulated it to reveal its power to communicate and shape reality. Whether through looping, repetition, erasure or compression, their active manipulation of their medium recalls the importance that action was given by artist Richard Serra in 1967 – 1968, when he published Verb List, a list of actions that a sculptor could use to create sculpture – to roll, to crease, to fold, to cut, etc. CUT explores the actions through which artists create video. Among the exhibition’s works are Christian Marclay’s Video Quartet, a 16-mm symphony on four contiguous, ten-foot screens that astounds the senses with its hundreds of sampled Hollywood movies; Omer Fast’s CNN Concatenated, in which the artist takes single words and images of CNN talking heads and arranges them so that “the news they deliver is the news he wants them to deliver,” Douglas Gordon’s 24 Hour Psycho, a work that uses the distortion of time and elimination of soundtrack to transform Alfred Hitchcock’s masterpiece Psycho, from a one-hour and 45 minute film into a 24-hour experience; and Michael Joaquin Grey’s The Blink, which matches the rhythm and tempo of a pop song – I’m Leaving on a Jet Plane as sung by Bjork – to footage of high diving from Leni Riefenstahl’s Olympia, her masterful, but frightening documentary of the 1936 Olympics in Berlin.